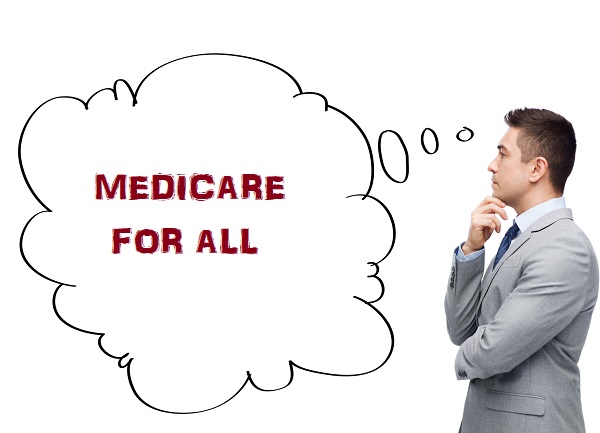 I’m writing this article in late October, a few weeks before I turn 65 and become eligible for Medicare. I’m being flooded with mail from various organizations who want me to enroll in their Medicare supplement plan. Like most baby-boomers, I can’t believe the day has come that I’m now old enough for Medicare. So, like any other senior citizen, I tried to contact the local Social Security office because I had some questions.
It took me three calls to get through only to be told that they will call me back because they are so busy. I get that—it’s Medicare Open Enrollment and just like our 4th quarter, a very busy time of the year for this government agency. I eventually went online and figured out the answer to my question. But now I’m asking myself a different question: Is the government ready to handle “Medicare for All”?
I think back about the botched roll-out of the Affordable Care Act in the fall of 2013. Remember that? The website blew up on the first day and was a huge disaster. Remember President Obama going on TV and trying to explain to the public why this happened? Yes, things eventually got fixed and now five years later it seems to work. However, I’m not convinced that the government can handle the “Medicare for All” proposal.
Leading Democratic candidates for president continue to promote the “Medicare for All” plan like it is the only hope for America’s health care future. If we set aside the financial issues of “Medicare for All”, I believe that there is no way a State or Federal agency can handle the health care needs of all citizens who are enrolled in such a program. We just don’t have the bandwidth for such an undertaking in America. I think the reality of this and the high costs that would be imposed on Americans in the form of new/higher taxes has made some of the candidates turn down their rhetoric a bit.  Quite frankly I think their use of the word “Medicare” is disingenuous because they are just trying to avoid using the term “Single Payer” because it produces visions of a government takeover of health care.
However, we might consider a discussion about the pros and cons of expanding the current Medicare program.
My observation over the past 40 years is that the cost of healthcare is causing serious problems in our economy. We continue to put ‘band-aids’ on various health care issues, but we need to seek out a longer-term solution to stabilizing the cost of healthcare in America. I recommend you read the book by Steven Brill “Bitter Pill: Why Medical Bills Are Killing Us” or “An American Sickness” by Elisabeth Rosenthal.
One possible effect of expanding the current Medicare program is that it could lead to a reduction of health care costs by using a government negotiated fee schedule that was enacted in the Medicare Modernization Act of 2004. Prior to the act, less than 50% of providers participated in Medicare, while today over 90% participate. That’s because the government reformed the way providers are paid and has helped reduce the costs of Medicare. If those payment reforms were to apply to private coverage as well as to Medicare it would help stabilize costs for everyone in America and not just senior citizens.
Another possible result of expanding the current Medicare program is the elimination of “Cost Shifting” in our healthcare system. Since the enactment of Medicare in the 1960’s, health care providers have been “cost shifting” from government payers to private payers. Here is an example:

A 100-bed hospital needs $100,000 a day to operate so it charges $1,000 per day per bed to break even. However, 75 of those beds are used by Medicare patients and Medicare only pays $750/day, resulting in a daily operational deficit of $43,750. When you divide that among the 25 non-Medicare beds it means that non-Medicare patients are charged $1,750/day which is 233% more than Medicare pays.

While the Medicare Modernization Act did reimburse providers more equitably, it didn’t fully stop the “cost shifting” that continues to affect private insurance or private payers. In my opinion, an expansion of the current Medicare fee schedule to apply to ALL payers would be a good thing. Many large employers who “self-fund” their employee health plan have been using a Medicare Price Metric (Reference Based Pricing) for several years and it has helped them stabilize their group health care costs.
Another positive I see about an expansion of the current Medicare program would be the continued use of private insurers to provide supplemental coverage to pay for the gaps that are not covered under Medicare. I’m told that more than 60% of Medicare participants have a supplement today and nearly 100% of them have a Medicare Part-D plan which is also through a private carrier.
Under “Medicare for All” proposals, private insurers and supplemental plans are completely eliminated. Having a choice of supplemental plans through private carriers is a popular feature of the current Medicare program and should be continued—certainly not eliminated.
As a former small employer, I paid a lot of money for the health insurance coverage for my employees. The cost rose each year and I was forced to make hard decisions about the level of benefits that I could afford. Under an expansion of the current Medicare system, employers could offer a group Medicare supplement that might cost less than current coverage and at the same time take advantage of stabilized premiums when a national fee schedule is applied to all U.S. providers including drug, hospital, physician and ancillary services.
I realize that my suggestions are not popular with many in my industry and certainly not popular with healthcare providers. But frankly, if we don’t do something now, the consequences for all parties will not be pretty. Look at Western Europe and you see movement away from Single Payer to combinations of public and private insurance programs that are working to contain costs, expand coverage and increase consumer choices. Even Canada is looking at major changes to their Single Payer system because it is not sustainable in its current form—they have a lot of disparity between their provinces in terms of affordability and access to health care. Why would America move in a direction that other industrialized countries are moving away from?

Americans lead the way in innovation and industry. We can build off the current Public and Private insurance systems and create something that is affordable, provides choice and lowers the cost of health care for all Americans. But this doesn’t require a complete overhaul of our current system. This system can and should work for the benefit of consumers, employers, and the government.

David L. Fear, Sr. RHU, is an employee benefit consultant and a partner with Dickerson Insurance Services, an Alera Group Company. He is a 40-year veteran of the employee benefits industry and former president of NAHU and CAHU. Fear is the 2015 recipient of the NAHU Harold R. Gordon Memorial Award as Health Insurance Person of the Year. He resides in Roseville, California.