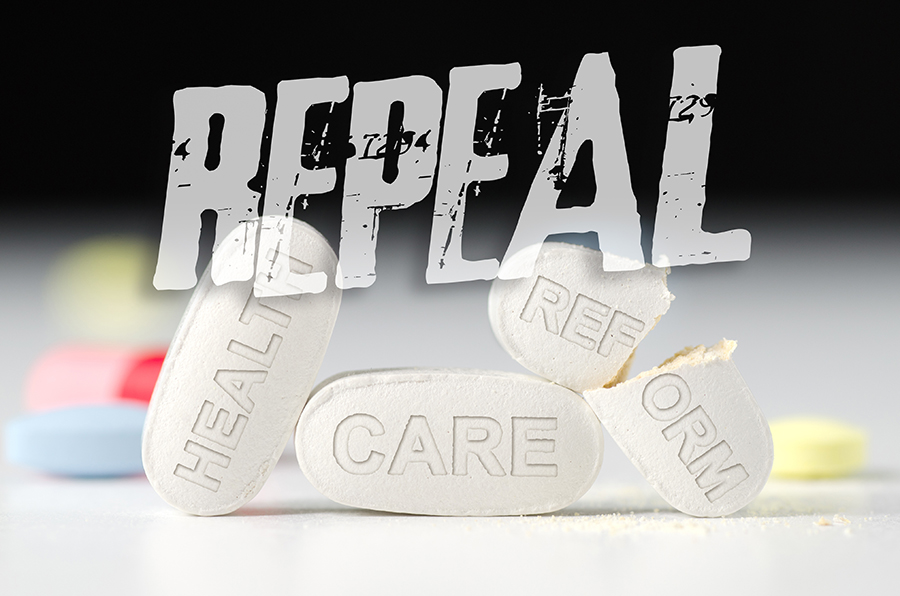 Lawmakers returned to Washington and wasted no time getting to work on the repeal of Obamacare. Sen. Mike Enzi, R-Wyo., introduced a resolution just hours after the new Congress convened last week that will serve as the vehicle for repealing much of the president’s signature health care law.

“Today, we take the first steps to repair the nation’s broken health care system, removing Washington from the equation and putting control back where it belongs: with patients, their families, and their doctors,” Enzi, chairman of the Senate Budget Committee, said in a press release on his website.

It’s a clear signal that “repeal” will come soon, and “replace” will come maybe not so soon. The move was the first step in Republican lawmakers’ plan to fulfill their most ardent campaign promise — to repeal the Affordable Care Act and replace it with a Republican alternative.

Republicans have to use a special legislative maneuver, called a budget resolution, to undo the ACA because they don’t have enough votes to overcome a Democratic filibuster in the Senate, according to NPR. Budget bills aren’t subject to filibuster, so lawmakers will be able to repeal the parts of the law that have budget and tax implications.

That means they can essentially gut the law, removing all the subsidies that help low- and middle-income people buy health insurance and getting rid of the smorgasbord of taxes — on medical devices, insurance companies and wealthy individuals — that pay for those subsidies
Enzi’s resolution calls on the Senate to get a bill to the Budget Committee by Jan. 27.

Republican lawmakers say they don’t want the 20 million people who have newly gained insurance because of the ACA to lose their coverage. So they plan to phase out Obamacare over time while they devise a replacement plan that they say will make affordable health insurance available to everyone, without the much-hated mandate to buy insurance if you don’t want it.
Many analysts are skeptical that this “repeal and delay” strategy will work.

“The most likely end result of ‘repeal and delay’ would be less secure insurance for many Americans, procrastination by political leaders who will delay taking any proactive steps as long as possible, and ultimately no discernible movement toward a real marketplace for either insurance or medical services,” said Joe Antos and James Capretta of the conservative American Enterprise Institute.

Obamacare Is ‘Cancer,’ According to Doctors and Surgeons – Cut It Out Quickly
While Republicans in Congress argue over repealing or replacing or delaying on the Affordable Care Act, the Association of American Physicians and Surgeons presented an immediate action plan in a recently released White Paper.

“ObamaCare is not like a weak but still beating heart,” states AAPS executive director Jane Orient, M.D. “It’s more like a cancer. You don’t want to replace a cancer. You just want to support the patient as he recovers from its removal.”

President Obama said that people could keep the health care plan they liked, Orient said, but she then asked: “If you don’t like your government plan, do you have to keep it?”

Orient said the entire health care delivery system and benefits are like the Leaning Tower of Pisa, propped up only by counterweights to offset unsustainable debt.

“True reform means we must reject unsound economic premises and remove barriers to competition,” she said. “We don’t want to replace one damaged tower with another one having the same disastrous flaws.”

New Treatment Center for Infusion Express
Infusion Express, an alternative to hospital infusion centers, announced its second San Francisco Bay Area treatment center as part of a national expansion of its consumer-driven model. Infusion Express offers individuals with chronic conditions the option of care in a private setting with extended hours, including evenings and Saturdays.

The Fremont treatment center is one of several new Infusion Express locations opening in major metro areas this year. Infusion Express contracts with self-insured employers and many health plans for in-network coverage.

Don Peterson, chief executive of Infusion Express in Overland Park, Kansas, said the company’s goal is to furnish a choice to patients.

“We’ve created a comfortable alternative that offers the same high-quality healthcare they receive at a hospital or doctor’s office in a setting where they’re treated like a guest,” he said. “Not just a patient.”

Employer Groups See Growth This Year, Expect to Add On-Site Workers
A survey by the National Association of Professional Employer Organizations shows that industry executives are optimistic about the prospects for strong growth in 2017, with 99 percent indicating they expect an increase in worksite employees this year, and 38 percent predicting a significant increase.

“The results of this survey reinforce what we have thought all along: It’s a good time to be in the employer organization industry,” said Napeo Chief Executive Pat Cleary. “More and more small business owners are realizing the value of the HR solutions PEOs provide, and we expect that to strengthen with the ongoing improvement of the economy.”

The Par8o referral management platform, a cloud-based technology that easily integrates into most electronic medical records including Allscripts, Cerner, Athena, and Epic, empowers organizations to better coordinate care and customize care delivery for each and every patient, based on location, clinical need, resource availability, and plan design.

“Last year – 2016 – was an important year for adoption of the Par8o platform,” said Dr. Daniel Palestrant, M.D., Par8o’s chief executive. “I believe 2017 will prove to be even more important as the scope of our network continues to grow and our patient empowerment technology is implemented. I am particularly proud that we have achieved this with minimal capital and completed 2016 firmly in the black.”

NEW PRODUCTS
TruAssure Insurance Co., a dental benefits carrier in Naperville, Ill., announced the launch of a set of new dental plan options for small and large companies, as well as for families and individuals. These new options offer employers flexible, standalone dental plan coverage with a focus on prevention and access to a large, national network of dentists.

Family and individual options offer coverage focusing on prevention and flexibility, in many cases providing benefits such as teeth whitening and orthodontia. The introduction of these plans is in direct response to the growing demand for dental insurance and preference for flexible, affordable benefits. According to the National Association of Dental Plans, three-quarters of employees expect their employers to provide dental insurance, with orthodontia and cosmetic procedures such as teeth whitening among the most requested benefits.

Karole F. Lloyd Named to Aflac Board
Aflac Inc. announced the appointment of Karole F. Lloyd to its board. Lloyd’s term will expire at the company’s Annual Meeting of Shareholders in 2017, at which time she will stand for election along with the other director nominees. The Columbus, Ga., company has also appointed her to serve on the Audit and Risk Committee.

Lloyd brings more than 37 years of accounting leadership and experience to Aflac Incorporated’s Board, consulting with many of Ernst & Young’s highest-profile banking, insurance, consumer products, transportation, manufacturing, and retail clients through mergers, IPOs, acquisitions and divestitures.