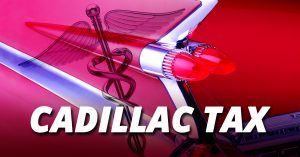 The Affordable Care Act taxes are all on the U.S. House of Representatives’ chopping block.

Republicans on the House Ways and Means Committee introduced a bundle of bills on Tuesday to delay the Cadillac tax, employer mandate and other taxes that healthcare industry groups have opposed.

The employer mandate gets a retroactive repeal from 2015 and a delay through 2018; this measure is paired with a one-year delay of the Cadillac tax.

While the Cadillac tax isn’t slated to take effect until 2019, critics say that employees of companies with high-cost plans will see the effects next year as impacted carriers begin to raise rates.

The employer mandate takes more immediate effect: In November, the IRS updated its website with instructions for employers as the agency planned to start collecting the penalties at the end of this year.

The bill package also delays the medical-device tax for five years; a tax on over-the-counter medications would get a two-year delay.

In a separate bill by Rep. Carlos Curbelo (R-Fla.), Puerto Rico health plans would get a two-year delay starting in 2018.

Committee Democrats were working with Republicans on a tax delay package through last week, but ultimately the Republicans brought their own legislation forward without Democratic co-sponsors. On Wednesday, Ranking Democrat Richard Neal (Mass.) said the two parties still disagree on how to pay for the delays: but he and Brady have re-opened staff negotiations.

Republicans released their bills without recommended off-sets, and it isn’t clear how and when they will pass. Committee members had hoped it would be included in an end-of-the-year spending deal, but that looks increasingly unlikely.

So far the negotiations on this package have been a House exercise although senators on both sides of the aisle have also introduced bills in the past few months to delay some ACA taxes. A Ways and Means spokesperson said committee Republicans are discussing “timing and process in the weeks ahead.”