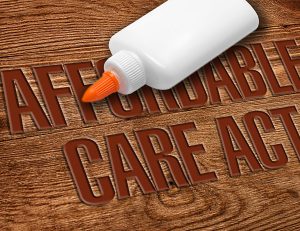 President Donald Trump has said that since the impending tax bill does away with the individual mandate, he considers the ACA repealed. Covered California Executive Director Peter V. Lee begged to disagree. “The penalty is not the glue that holds the ACA together,” Lee said in a press briefing this morning. Lee said that consumer fear of penalties is a far less powerful force than consumer desire to buy good insurance and live healthier lives.

Health insurance, however, is a product that needs to be sold.  Consumers need the guidance of producers who understand insurance. Importantly, he said, among the many factors that have destabilized the ACA marketplace and may continue to do so, is the slashing of federal budgets for marketing ACA enrollment. California took marketing in its own hands and saw results. As of last week, Lee said Covered California had enrolled 220,000 new participants, which is a full 10 percent more than last year. That means that so far Covered California has 1.4 million new and continued enrollees. The deadline for January 1, 2018, coverage has also been extended until Friday, December 22. And Covered California open enrollment doesn’t end until January 31, 2018.

Lee warned, however, that we need to now look toward 2019, which he predicts will be dramatic for California and even more so for the rest of the nation. Despite Lee’s prediction that much health insurance debate is ahead, he said he was ultimately optimistic. He called the perspective of the current administration “good news” for Americans because it may hasten the speed at which lawmakers pivot away from all the fighting and toward figuring out a “health care system that works for all Americans.”

Is This a Tax Plan or Health Care Legislation?
Healthcare Reform magazine says the controversial tax bill will have a wide-reaching effect on American businesses and individuals, from business tax rates to a restructuring of tax brackets. Curiously for a tax bill, however, it could end up being one of the most important pieces of healthcare legislation since the passage of the ACA in 2010. Read the full article for predictions on what might happen next.

Hixme Announces Online Insurer Profile Database Tool
Agoura Hills-based Hixme recently announced a new comprehensive Insurer Profile Database Tool. Hixme is a hybrid company leveraging digital health, insurtech and fintech values. According to the company, it’s on the forefront of ushering in worker-owned health benefits for large organizations. The company has previously told Cal Broker that it welcomes broker inquiries, though it has also been referred to as working in the “direct-to-consumer” space. Hixme says it expects to eventually expand its Insurer Profile Database Tool to measure true customer experiences captured through social media tools, consumer ratings, service metrics and other relevant factors.

MassMutual Study Finds Lower-Income Savers Benefit Less From 401(k)s
Participation in 401(k) plans is high across the board for middle-income workers, but the lower their income the less likely they are to reap the full advantages from their employer’s retirement savings plan, according to a new Mass Mutual study. MassMutual’s research shows that savers with higher incomes are far more likely to contribute a higher percentage of their income and take full advantage of matching contributions.  It highlights the need for more education, especially about available strategies to help make retirement savings more affordable for more people.

Overall, 84 percent of middle-income Americans whose employer matches contributions to a 401(k) save enough to receive the full match, according to the 2017 MassMutual Retirement Savings & Household Income Study. However, annual household incomes as well as gender are determining factors in the likelihood of the saver contributing enough to obtain the full match. The internet-based study polled 1,010 Middle Americans with annual household incomes of between $35,000 and $150,000.

Six in 10 study respondents say their employer matches retirement plan contributions, with little variation between income levels. The matches range from 2 percent of an employee’s salary to 7 percent or more, with 5 percent matches being the most prevalent (21 percent), the study finds.

Benefits delivery firm Hodges-Mace, LLC, announced the expansion of its sales leadership team with the appointment of Mike Ehrle to SVP of Strategic Partnerships.  In his new position, Ehrle is responsible for deepening corporate ties with national brokers, technology consultants, HCM/payroll companies, medical and group carriers, private-equity firms and other key players in the Hodges-Mace ecosystem. Ehrle will also be one of California Broker’s featured contributors in 2018. Congrats and welcome Mike!

Insurtech company Bold Penguin announced insurance industry veteran Lou Geremia has joined the company as chief revenue officer. Geremia has an extensive online insurance leadership background, which the company says he’ll be using to grow the company’s footprint and impact on the industry.

Golden Gate Chapter of Society of Financial Service Professionals Meeting
January 4, 2018 – 9:00am-5:00pm, Round Hill Country Club, Alamo, CA
The DOL, SEC, FINRA, DOI, NAIC – they’re all ramping up regulations that can amount to significant headwinds, if not tsunamis, for financial advisors in 2018 and beyond. You can get off to a fast start and make 2018 a compliant—and productive—year. Get insight, guidance, and an action plan to thrive in the new regulatory environment from nationally recognized experts supporting all areas of financial services. Lunch is included and a no-host cocktail networking reception immediately following program. Register now for the reduced rate of $99.