FAIR Health, an independent, nonprofit organization that aims to bring transparency to health insurance information, released Teasing Apart the Threads to the Surprise Billing Debate: Understanding Policy Choices through the Lens of Independent Data.   The brief intends to clarify the implications of different legislative choices related to surprise billing. A refresher: though surprise billing may sound like fun, it’s not.  Balance billing (to use the problem’s less happy name) happens when patients receive bills for out-of-network emergency care or other services they unexpectedly or unintentionally received from an out-of-network provider. Think of it more like shock billing. Everyone agrees it shouldn’t happen, but there’s currently a lot of legislative debate on how to determine the amounts that plans should pay to compensate providers instead of said shocking. This is, to be perfectly honest, where things get pretty complicated. As we said, though, the brief is trying to educate us. It parses the option of mandating a value for reimbursement based on a clear benchmark, and details the four types of benchmark generally proposed:

And if you’d like to get a better idea about how surprise bills impact patients, read this Kaiser Health News article.

Both Seema Verma, administrator of the Centers for Medicare & Medicaid Services, and Joe Grogan, director of the White House Domestic Policy Council, took the opportunity this week to sound off about Medicare-for-All proposals. You guessed it, they don’t like the idea at all! Verma, in fact, said proposals for such a plan currently represent the  “greatest threat” to the U.S. healthcare system. The two delivered their remarks at a recent Federation of American Hospitals meeting, a group that comprises for-profit hospitals and health care systems and also staunchly opposes any such plan.

ACA Plans Not So Affordable for the Unsubsidized

According to a new report by Kaiser Family Foundation, the number of unsubsidized enrollees in ACA-compliant plans has fallen from 6.4 million in 2015 to 3.9 million in 2018. Unlike subsidized enrollees, consumers with incomes over 400 percent of of the federal poverty line have to bear the full cost of premium increases if they buy an ACA-compliant plan. The study points to the fact that ACA plans are becoming unaffordable for the middle class. During the same time period, marketplace enrollment among subsidized enrollees rose from 8.7 million to 9.2 million. 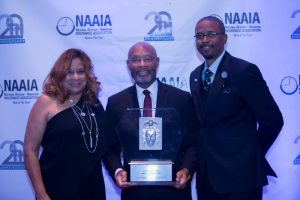 Congrats to the National African American Insurance Association for celebrating its 22-year anniversary. NAAIA was organized to create a network among people of color and others employed in or affiliated with the insurance industry. The association has 15+ chapters throughout the nation and its members represent every sector of the industry. The organization was founded by Jerald L. Tillman, LUTCF. Check it out at NAAIA.org.

According to the 10th annual Transitions Optical Employee Perceptions of Vision Benefits survey, eight in 10 employees are bothered by vision-related symptoms at work—ranging from eye fatigue and headaches (half of employees), to dry eyes and blurred vision (more than one in three employees). Check out the full report here.

March Issue Is Out!

Our March issue is out and we’ve given some space to the issue of climate change and the insurance industry. We’ve already received a couple of, er, spirited emails- to-the-editor. We’re doing our job, folks.

The Inland Empire Association of Health Underwriters sales symposium will include speakers, exhibitors, CE and more.  Info and registration here.