Industry Leaders Step Up to Tackle Something Necessary

Los Angeles Association of Health Writers (LAAHU) has launched a new committee called Diversity, Equity and Inclusion (DEI). The committee has been doing great work with hosting lunch Zoom discussions, a new book club and more. LAAHU’s vision with DEI is succinct: “LAAHU is a diverse community of health insurance and benefits professionals committed to equity and inclusiveness for all its members and those whom they serve.” On the following pages members of the DEI committee share what motivated them to get involved. 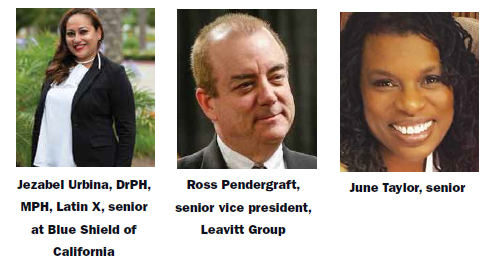 California Broker: What made you interested in getting involved in DEI? Was there a pivotal point?

Dr. Urbina, Blue Shield:
“My interest in getting involved with DEI started four years ago when there was political talk about certain races or immigrants being called rapists and drug dealers and such. So, that’s pretty much why I got involved—because of the inequities and the health disparities involved due to stereotypes and racism. Having worked in hospitals, I know firsthand that the immigrant population is the least likely to use medical services, because they’re very frightened and scared to be honest.”

Pendergraft, Leavitt Group:
“What’s my story? Good trouble. Lots of good trouble. [Akin to the late civil rights hero Congressman John Lewis]. The George Floyd incident and the subsequent movement started our conversation. Whether any of us like it or not, we have a problem with racism in the United States. We have to learn how to get rid of racism and learn how to bring unity to all the people living here. Our book club that we just started in March addresses three out of the four of the DEI initiatives: training, communications and mentorship. Essentially this book club is going to bring a bunch of people together who may not believe they are racist, but may become aware of subtle and not-so-subtle biases. It’s really a book on how to unify. The author, Miles McPherson, preaches that we have to learn how to deal with things we don’t like. We have to learn how to communicate with people who have different ideas from us. We don’t realize all the elusive conditioning.”

CB: It’s time for all people to have a better understanding of what is racism from the inside out—from the perspective of the people being disrespected. We need to be able to have these difficult conversations. “What are my boundaries? What are my beliefs? Am I doing something that is offensive, harmful or abrasive to others in some way?” It seems like this is the first step to reconciliation and healing.

Taylor, Kaiser Permanente:
Exactly. I too was inspired by George Floyd’s death. As an African-American mother of three sons there’s not a day that goes by that I do not think about their safety. When George Floyd screamed out ‘I can’t breathe’ and called for his mother, every Black mother in America could feel the weight of his words, and our hearts were saddened that day. Brian Sullivan, the president of LAAHU, was kind enough to open a forum for those members who wanted to express what they were feeling regarding the incident. And I had to speak up. From that meeting the DEI committee was formed, and I was asked to lead the charge. I’m excited about the work that I will be doing this coming year with Ross, Jezabel and NAHU DEI Chair Wayne Guzman. We’re eager to roll out our eight initiatives to guide our efforts. We look forward to sharing our progress with California Broker readers throughout the year. And we are hoping to get more people involved with our association!

“Whether any of us like it or not, we have a problem with racism in the United States. We have to learn how to get rid of racism and learn how to bring unity to all the people living here.” — Ross Pendergraft

CB: Would you give us an example of your own experience of racism?

Dr. Urbina, Blue Shield:
There was a research study done that found people of color have a longer wait time to get an appointment to see a doctor than a white person—it was some ridiculously high statistic. That just reminded me of a time in my very early 20s when I was a single mom. I called a doctor’s office to make an appointment. They asked me, ‘what insurance do you have?’ I said, ‘Medicaid.’ ‘Okay, well we don’t have anything available until April,’ which was about four months away. And then I asked, ‘ what if I have a PPO?’ and they said ‘we have an appointment two weeks from now.’ So, people don’t really understand that it’s things like that that make a huge difference. Why should what insurance you have be a determining factor of when you can receive care? And who is more likely to have a PPO, right?

So, I’m very involved in research because I spent so many years in college doing research. Data can show us how these subtle and not-so-subtle behaviors translate into effects on minority populations.

CB: Can you give us a peek into what else you’re up to?

Taylor, Kaiser:
We also have our mentorship initiative. Along with recruiting from the Cal State Colleges and community colleges, we want to reach out to millennials to give them more insight into our industry and all the great benefits that come with it. There’s so much opportunity here! This industry was a life changer for me. I went to UC Irvine and got my degree and I came into this industry after I had my first son. And I said, ‘Okay I’m going to do this until I get a real job.’ Eventually, though, I realized this industry was the best thing that ever happened to me. I just want to see others have that same opportunity.

Join the Book Club! Sponsored by Dickerson Insurance Services, LAAHU’s DEI Book Club will run through September. The group is reading and discussing The Third Option by Miles McPherson. McPherson, a former defensive back for the San Diego Chargers, is the pastor of The Rock Church. The group plans to culminate their discussion by taking a trip down to San Diego to meet the author. All are welcome in the club. Register at www.laahu.org.