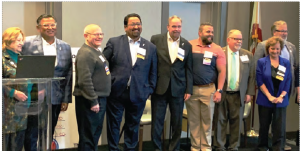 With California’s population heft, we super drive many of the nation’s cultural trends – zoom zoom! — including how healthcare is delivered. So, one of California’s premier insurance professional organizations, newly renamed California Agents & Health Insurance Professionals (CAHIP), has a HUGE role to play.

CAHIP works to help consumers — individuals, families and businesses — navigate the health insurance landscape. And since the Golden State has a burgeoning citizenry of 39 million and counting, that’s a major undertaking. So, the CAHIP Capitol Summit in Sacramento May 9-11 was critical to get members educated on legislative issues and ready to meet face-to-face with California The focus was advocating for “what is good for consumers as well as the system as a whole.” The excellent speakers presented great information, from actual statistics to lifestyle changes that all could benefit from.

The gathered learned that 94% of Californians have health insurance, leaving only 6% uninsured. So, according to one of the presenters, “things are lawmakers.  working well in our state especially with the successful defeat of AB 1400 Single Payer. As we know, California policy often leads the way for the rest of the country and knowing single payer is still not palatable here is a relief to others across the country.”

Sue Wakamoto-Lee, CAHIP president-elect, noted in CAHIP’s Statement May/June 2022, “A HUGE shout-out to our own VP of Legislation Dawn McFarland, for winning a Legislative Achievement Award for her effort leading CAHIP to assist in defeating single-payer legislation in the form of AB 1400. Great job, Dawn!

It was one of TWO Legislative Excellence Awards recently earned by California in Washington, D.C. Presenter Justin Wallin of J. Wallin Opinion Research, was commissioned by CAHIP to do a survey of California voters.

We’ll have a summary of that survey in an upcoming issue. The survey revealed that “Single Payer” is not wanted by a majority of Californians. It is not perceived as a feasible way to reach the increasingly popular concept of Universal Health Care for All.

Troy Underwood of Preventia Group gave a impassioned presentation on holistic wellness, stating that “we don’t have a health care system, we have a sick care system.” Underwood is known as an industry disruptor and serial entrepreneur. According to his bio, “Underwood could sum up the nation’s health insurance crisis with two words: better diet.” He talked of practical ways to combat poor health with a radical change to a plant-based diet that would combat obesity, heart disease, diabetes and much of what ails the American population.
We’ll also be featuring Troy’s approach in an upcoming issue.

Fun Fact: The population of California is the largest in the U.S. and if California were a sovereign nation (2021), it would rank as the world’s fifth largest economy – Amazing!

Other important presentations included Calif. Assemblywoman Marie Waldron; Executive Director of Covered California Jessica Altman; and a NAHU leadership panel to give the national perspective, to name just a few.

A fun and helpful skit to show members what to expect when meeting legislators face-to-face was a particular highlight. Amid much laughter, the audience saw firsthand the dos and don’t’s of legislative meeting etiquette – a great practice that will serve well when that exciting (and maybe a bit anxious) moment comes and folks are actually in front of a lawmaker!

So, stay tuned in and we’ll be sharing more of the great information CAHIP sponsored for the 2022 Capitol Summit.