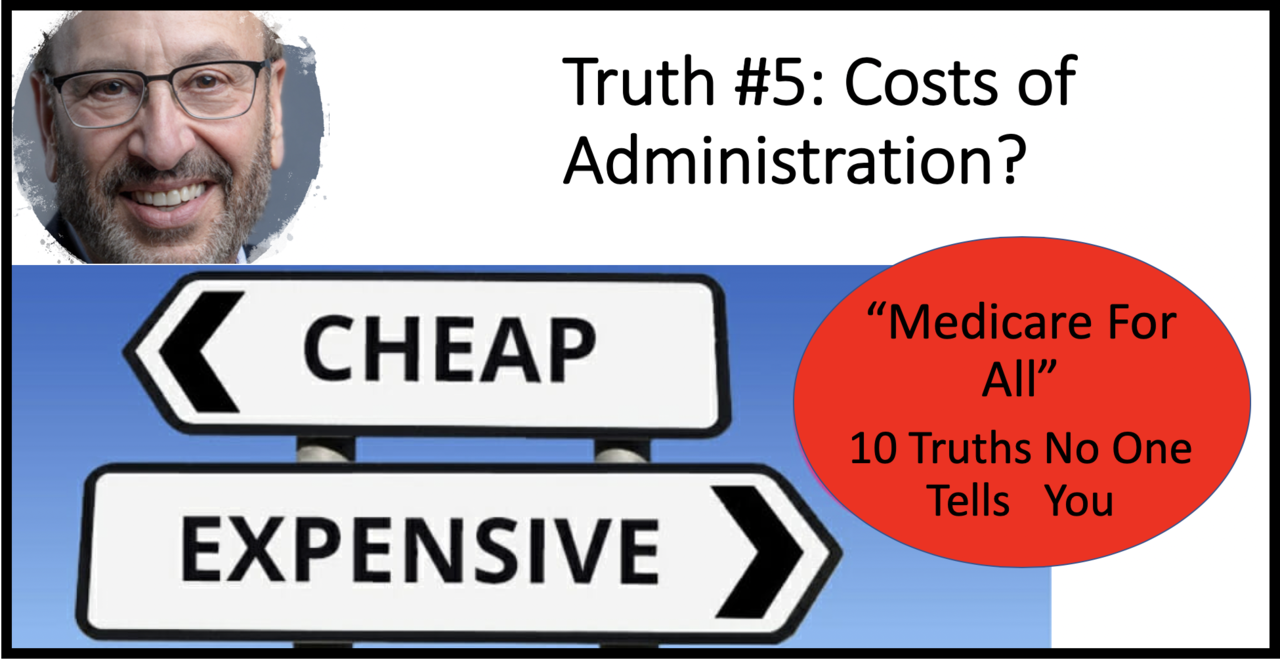 Another favorite topic at the heart of the US healthcare debate is whether governments can run health insurance programs at lower operating costs than private insurance companies.

Private Industry Supporters: Some argue that governments regularly prove incompetent running large complex operations at a low costs. Regularly cited is the US mail system and the VA; more locally, public schools and DMV’s. And in the case of Medicare and Medicaid, something about these programs appears to set up a breeding ground for costly fraud and theft, they might argue. Finally, this group argues that competition inherently creates innovation, productivity and lower unit operating costs, something that does not naturally occur with government programs.

Government Supporters: On the other side, many argue that the sheer scale of a single program like Medicare creates consistency and low unit costs, the result of economies of scale. Further, that by extending that program to even more Americans, those scale economies will improve more. This group argues that the profit motive of private companies can only result in higher costs, not lower, enriching investors and executives.

What Do The Numbers Say?

As I researched this point, I found that cost effectiveness arguments between Medicare and Private Insurance is an old one, with each side pretty dug in. But there are some important themes associated with the underlying math.

Private market supporters dispute this “percentage comparison”, and instead look at “operating costs $’s per capita” and compare those. They argue that when compared in this $ per capita measure, monthly Medicare operational costs are well over $100 per capita, while monthly private insurance cost of operations are well less than $100 per capita. Their conclusion is, “Private market providers have far lower operating costs, and are therefore much more efficient than Medicare”.

Why Is This Comparison Of Operating Costs of Medicare and the Private Market So Difficult?

1) As much as 50% of all US healthcare occurs in the last few months of a person’s life. This dynamic is a major driver of Medicare Coverage and its operating costs. It is far less of a driver of private healthcare coverage for younger and mostly working Americans and the related operating costs, confusing the comparisons.

2) Many diseases of aging are much more common in Medicare than in private health coverages. The most expensive is Kidney Care, and ultimately transplant or Dialysis, (which has its own category in Medicare). Beyond that, Cancers, Heart Disease, Dementia/Alzheimer’s and others are far more significant drivers of continuing costs for those covered by Medicare than those on private insurance coverages at younger ages, confusing the comparisons.

3) Workplace related coverages more often coordinate coverage with workers compensation, or even car and homeowners insurance coverages than those with Medicare Coverages. This produces different operating costs and medical coverages under the private health coverages, confusing the comparisons.

4) Private Insurance coverages are or have been subject to significant state Premium Taxes and other health care related state and federal taxes. These are often categorized as “Operating Costs” in comparisons, confusing the comparisons.

5) Some comparisons don’t capture all government expenses that support the Medicare program, perhaps to advantage this argument. Examples of services performed for Medicare by other parts of the government that aren’t accounted for: The Social Security Administration collects premiums, the Internal Revenue Service collects taxes for the program, the F.B.I. provides fraud prevention services, and at least seven other federal agencies and departments also do work that benefits Medicare, confusing the comparisons.

6) As pointed out in previous installments, a large and rapidly increasing portion of the Medicare eligible population opts out of traditional Medicare and purchases a Private Plan alternative from private companies. This is now approximately 40%. Operating costs are imbedded in the coverage price and not easily separated for purposes of comparison any longer, confusing the comparisons.

As some of this discussion indicates, it is nearly impossible to formulate a clear comparison between Medicare operating costs and “the private market”. However, it also appears unlikely that the original Medicare Program administration, when properly compared, is more efficient than the highly competitive private market. That market now provides many low price, high value alternatives for rapidly growing number of Medicare eligibles. It is those same private market players who provide specialized solutions for younger and more often working American families at lower per capita costs than the Medicare Program, the measure that this writer is moved to support.