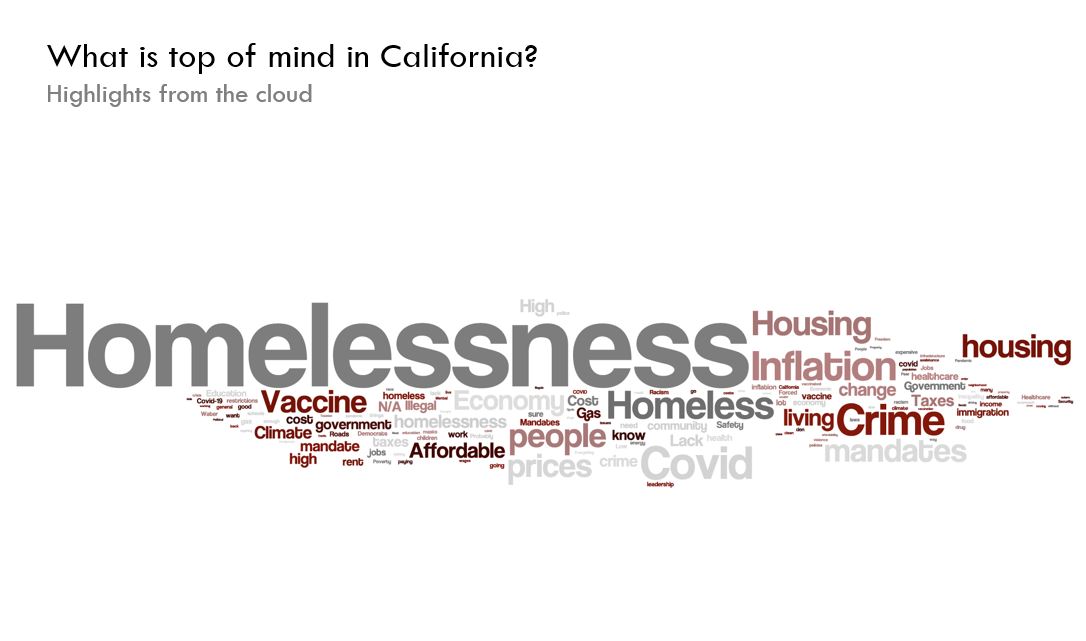 California Voters Identify Economy, Homelessness as Most Important Issues — Not Health Care
Survey sponsored by CAHIP and presented at May 2022 Capital Summit

BY FAITH BORGES AND JUSTIN WALLIN

Facing the dawn of election season and yet another statewide attempt at single payer healthcare in California, the California Agents & Health Insurance Professionals (CAHIP/formerly CAHU) wanted to know where voters stand on healthcare reform and what issues were top of mind.

Despite the survey taking place amid the worst global health pandemic in a century, the results do not indicate an electorate concerned with or seeking healthcare reform. Under CAHIP’s previous banner, the California Association of Health Underwriters (CAHU) in 2017 when faced with a similar attempt to dismantle the current healthcare system conducted a voter poll and found that an overwhelming majority of Californians liked their current healthcare and were not supportive of being forced onto a government-run program.

However, the pre-COVID-19 world was much different, and CAHIP wanted to know if a global pandemic had changed the perspective of likely voters in California. Equipped with nearly identical questions and methodology as the 2017 poll, CAHIP commissioned a second poll from November 5-9, 2021, via telephone survey (see more on methodology article end). The poll revealed an electorate that remains deeply opposed to single payer legislation that was before the California State Legislature.

The phone survey conducted in English and Spanish began with a simple, impartial question. When asked, “What is the most important issue facing your community today?” the leading answers were predictably the economy/jobs (18.2%), homelessness (16.6%), and COVID-19 (14.3%). Public safety, affordable housing, and environmental issues came in well ahead of “healthcare,” which was indicated at just 2.1% of responses. The poll also revealed that nearly three-quarters (72%) of Californians are satisfied with the timeliness, cost, quality, availability and accessibility of their healthcare coverage. Support was strongest amongst Democrats and Independents but was universal across all party affiliations. In addition to the high levels of support for the existing healthcare delivery system, survey results showed intense opposition to establishing single payer healthcare (53% strongly oppose it).

What was the single payer proposal?
The proposed single payer bill, AB 1400 (Kalra) that was before the California legislature earlier this year, would have effectively abolished private health insurance in California and mandated a government-run monopoly on all healthcare services in California, called CalCare. The new system would eliminate all existing individual and group private health insurance coverage, including Medicare, Medi-Cal, Long-Term Care and Covered California, and would shift responsibility for administering and financing health coverage to the state government. 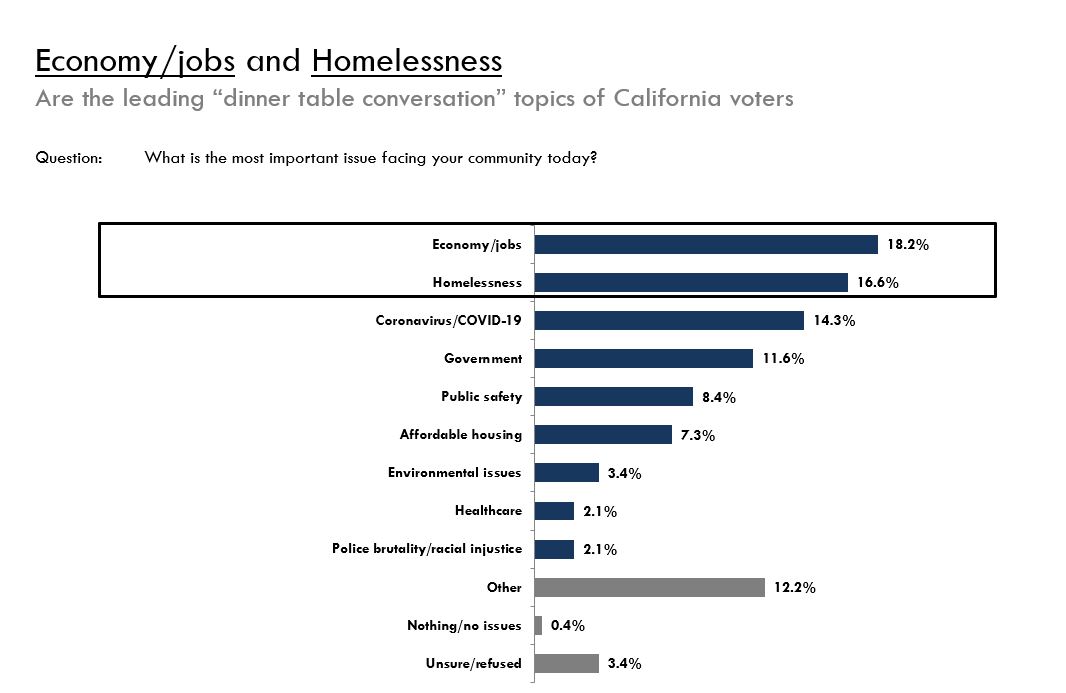 Information from this poll was used to gauge voter attitudes and priorities. Demonstrating low interest in healthcare reform while simultaneously showing concerns about the economy can give legislators great pause about advancing reforms like AB 1400, which require every Californian to forgo their existing coverage, which they like, in lieu of a new government-run program. The state-run single payer system, CalCare, would have also required hundreds of billions of dollars in new taxes to finance. 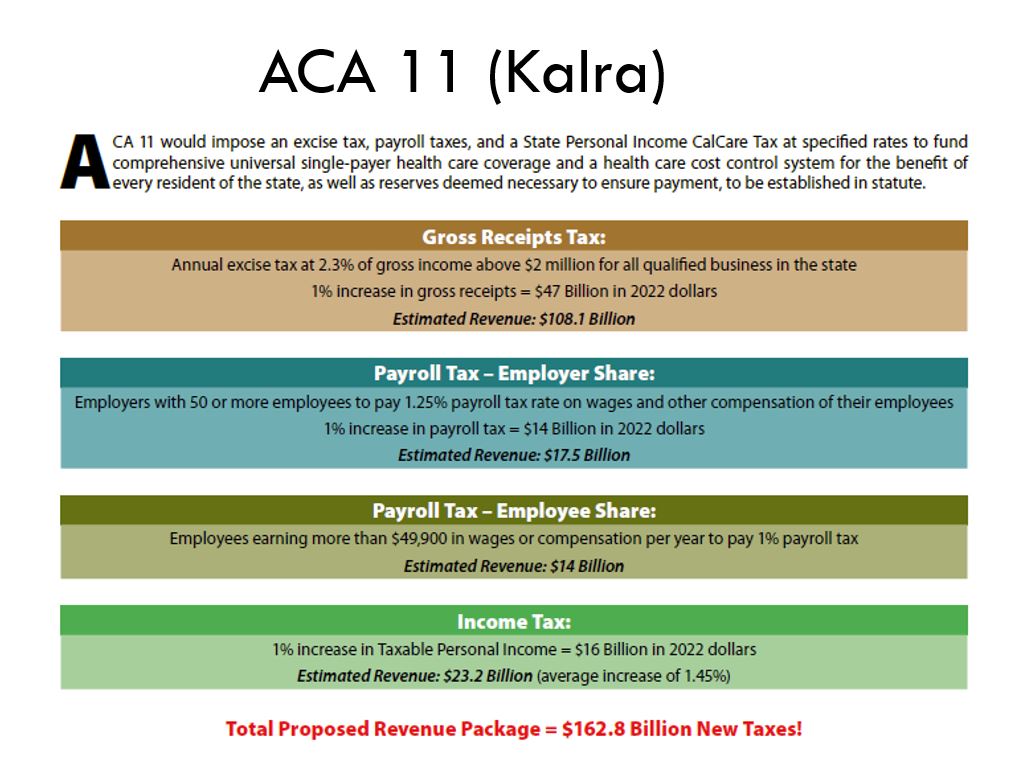 Catching up on cost and what happened to AB 1400

Even with a record-breaking 2022-23 budget of $300 billion, the state still falls hundreds of billions short to fund the type of healthcare reform proposed by AB 1400, and its nearly carbon copy predecessor SB 562 (2017), authored by the current California Insurance Commissioner, Ricardo Lara. Supporters of the notion of exclusively government-run healthcare are led primarily by the bill’s sponsor, the California Nurses Association (CNA). Proponents repeatedly cite “system savings” if the state were to shift to a government monopoly on healthcare, yet still acknowledge the need to raise “new funds” to finance AB 1400. Their solution was a companion bill to AB 1400, ACA 11 (Kalra and Lee), which called for various tax increases.

Despite claims of “savings” from proponents, the California Legislative Analysts’ Office (LAO) found the policy proposals would cost somewhere between $494 billion and $552 billion per year, with cost growth of around $20 billion to $30 billion annually. The LAO’s comprehensive analysis concluded that CalCare could cost between $9 billion and $67 billion MORE than existing statewide healthcare expenditures. The LAO’s report was in response to a request by the Assembly Rules Committee and although it was released after the defeat of AB 1400, it will likely provide ripples of economic caution for similar legislative attempts in the future.

Even as Californians were still recovering from the COVID-19 pandemic, there was recognition by voters that AB 1400 would leave them with an astronomical bill for their healthcare, little accountability, and no guarantee of better or even similar healthcare. The bill died as it was not taken up on the Assembly Floor by the Jan. 31 deadline. To the untrained observer of California politics, this may have been a surprise given the bill’s party-line vote counts advancing through the

Assembly Health Committee (11:3) and the Assembly Appropriations Committee (11:3). Yet the bill’s author, Assemblyman Ash Kalra (D-San Jose) chose not to put the bill up for a full house vote in the Assembly, citing imminent defeat by a vote deficit of double digits. The underlying politics of that vote deficit is that 2022 is an election year and increasing taxes by hundreds of billions per year does not look great in reelection mail and commercials.

Speaking of politics, directly following the announcement that AB 1400 would not be brought up for a vote, Assembly Speaker Anthony Rendon (D-Lakewood) stated, “The shortage of votes needed to pass this bill out of the Assembly indicates the immense difficulty of implementing single-payer healthcare in California. Nevertheless, I’m deeply disappointed that the author did not bring this bill up for a vote today. I support single-payer and fully intended to vote yes on this bill. With time, we will have better and more successful legislation to bring us closer to this goal. I expect more and more of my colleagues to sign on, so we can make California a healthcare justice leader…”

Building on the statement of support from the Speaker, proponents have vowed to reintroduce similar legislation next year when a new class of legislators will be sworn in following the 2022 election this November.

Of interest to our members, opposition to single payer
has marginally increased;
however, it is also worth noting
that so too has support.
This polarization of positions is
perhaps unsurprising given
the greater trend of political division
that has occurred within the last 5 years.

From the polls to the poll
Since this fight is bound to continue for the foreseeable future, let’s unpack some voter concerns and trends to consider in future legislation. After assessing voters’ initial attitudes towards healthcare reform, related messaging was included in subsequent questions to assess the impacts of informing voters about the possible utilization and cost outcomes of CalCare. Those messages included concerns that the proposal would eliminate employer-paid health coverage to be replaced with a government-run monopoly on healthcare which may reduce the delivery of quality healthcare and hinder medical advancements for Californians. These tested messages strengthened opposition. 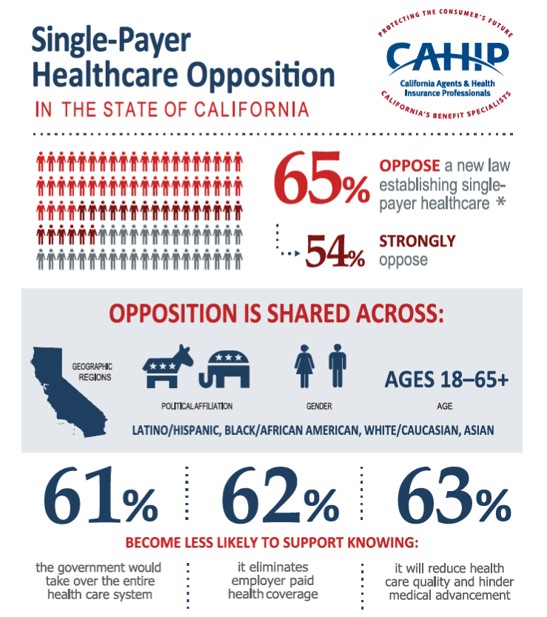 Since the previous poll conducted in 2017 used nearly identical questions to the 2021 poll, we were also able to examine trends in voter preferences. Of interest to our members, opposition to single payer has marginally increased; however, it is also worth noting that so too has support. This polarization of positions is perhaps unsurprising given the greater trend of political division that has occurred within the last 5 years. 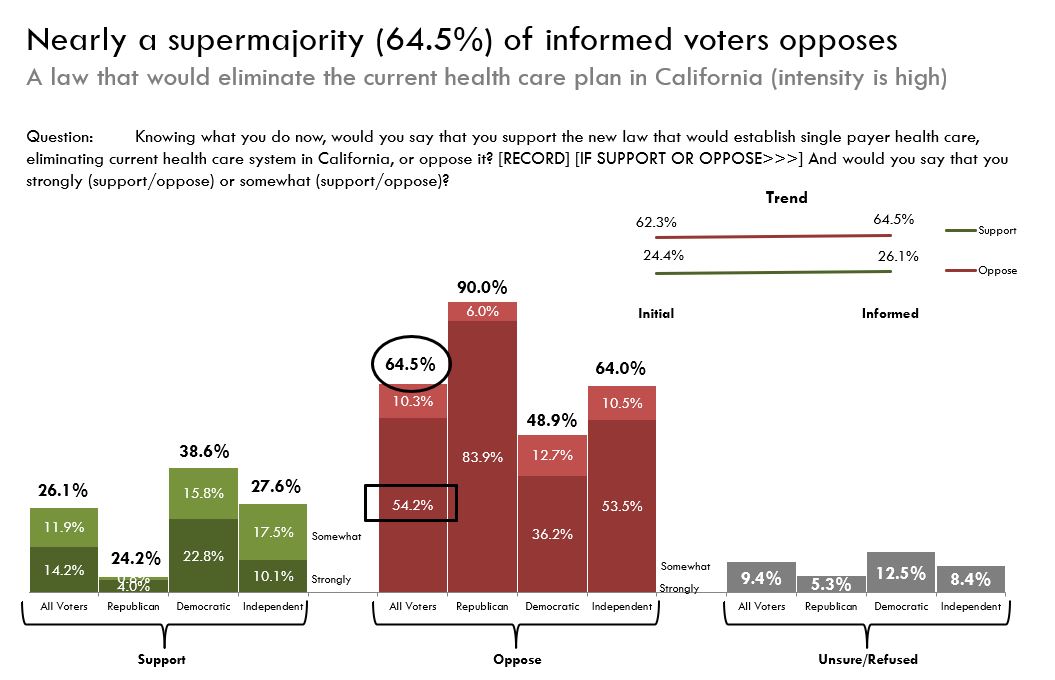 Now what?
The legislature only has a few weeks until the conclusion of the 2021-22 legislative year. On Aug. 31, 2022, the gavel will fall one final time for this class of elected leaders. Those seeking re-election will shake hands and kiss babies in their districts until the November election yields the next batch of lawmakers to be sworn in on Dec. 5, 2022.

CAHIP looks forward to continuing its mission with the newly elected legislature to improve our members’ ability to meet the health, financial and retirement security needs of all Californians through education, advocacy, legislation and professional development.

For CAHIP members looking for information on this poll and other educational resources on AB 1400, ACA 11, California’s recent achievement of Universal Healthcare, and more, visit the Legislative tab of www.CAHU.org.

CAHIP looks forward to continuing
its mission with the newly elected
legislature to improve our members’ ability
to meet the health, financial and retirement
security needs of all Californians through
education, advocacy, legislation,
and professional development.

About California Agents and Health Insurance Professionals CAHIP is the state’s largest association of health insurance agents, brokers and other health insurance industry professionals. Our members help millions of individual Californians, families and businesses evaluate, select, purchase and use their health care coverage plans. Our agents and brokers also serve as consumer advocates for policyholders and their families year-round to help with questions and if coverage disputes arise — all at no additional cost to the consumer.

Not a member yet? https://nahu.org/membership/join-now CAHIP works diligently with stakeholders, legislators, and regulators to ensure the best possible outcomes for Californians, and their leadership frequently cites our input and impact. For more information, go to www.cahu.org.
Survey methodology From Friday, Nov. 5 through Tuesday, Nov. 9, 2021, J. Wallin Opinion Research conducted a telephone survey of voters throughout the State of California. One thousand voters were interviewed, in Spanish and English and calling both mobile and landlines (88.8% of this survey was completed on mobile phones). The sample is stratified and has a margin of error of +/-3.1% (95% confidence interval). An executive summary of the poll and its methodology are available. 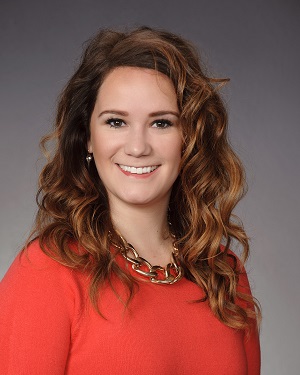 FAITH BORGES is legislative advocate on behalf of California Agents & Health Insurance Professionals (CAHIP). She joined California Advocates as a senior lobbyist in 2017. Borges provides professional advocacy services before the legislature and regulatory agencies such as Cal OSHA, the Department of Workers Compensation, and Covered California. Prior to joining the firm, she was legislative director for Assemblymember Catharine Baker. During her tenure in that position, she sent many bills to the Governor’s desk, including bills on employment development, health care, local government, transportation, business and professions, and privacy, all of which were signed into law. Prior to her position in the Assembly, Borges worked for two senators, Senator Ted Gaines, and Senator Anthony Cannella. With a decade of combined experience as a legislative advocate and staffer in both houses of the Legislature, she is a policy and strategy expert. 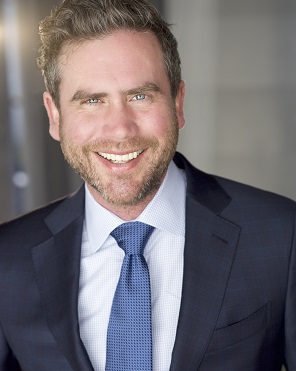 JUSTIN I. WALLIN is CEO/Pollster with J. Wallin Opinion Research. He is a “marketing concept” strategist, with more than 15 years of experience helping to develop communications strategy through opinion research. Wallin delivers strategic direction to Fortune 500 firms, statewide, city and municipal governments, political candidates and campaigns, organizations and non-profit organizations and other businesses.

He is a recognized expert in accurately measuring public opinion, forecasting outcomes and identifying the most effective ways to influence thoughts and behaviors.

A regular guest on CNN, BBC and Fox News, his research, commentary and analysis can be found in Politico, Roll Call, Campaigns & Elections, Public CEO and Inside Politics. He has lectured at many prestigious universities and taught both graduate and undergraduate courses in marketing. He is a featured speaker throughout the nation on matters of strategy, marketing and messaging.

Wallin is a Fellow of the Jesse M. Unruh Institute of Politics at USC. He received his MBA with an emphasis in marketing and strategy from USC and his BA in Philosophy from Whittier College. He is a member of AAPOR and CSDA. Contact: Jwallin@jwallin.com Website: jwallin.com