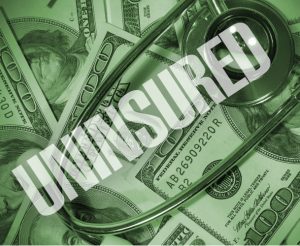 As President Trump’s first year draws to an end, a new Gallup study says that the nation’s uninsured rate is up 1.3 percentage points to 12.2 percent. This increase in people who don’t have health insurance is particularly notable given that 2016 closed with a record low of 10.9 percent uninsured. The 1.3-point increase in the national uninsured rate during 2017 is the largest single-year increase Gallup and Sharecare have measured since beginning to track the rate in 2008, including the period before the Affordable Care Act went into effect. According to the Gallup findings, the 1.3 point increase represents an estimated 3.2 million Americans who entered the ranks of the uninsured in 2017. The California Healthcare Foundation says there may be as many as 2.9 million Californians who remain uninsured.

Good Times for Sutter Health Plus
Not-for-profit Sutter Health Plus recently announced the results of its 2017 goals, which showed significant gains toward it’s plan to transform health care in Northern California. Sutter’s membership increased 37 percent, with 80 percent of members renewing coverage.   Since its inception in 2014, the health plan expanded into three additional geographies, most recently offering coverage in Santa Cruz County. The Sutter Health Plus network includes 30 hospitals, 10 walk-in care facilities, dozens of urgent care centers and more than 7,000 providers.

The Basics of Health Captives for Small Employers
Still a bit unclear about what a captive is and how a small or medium employer might use one? Check out Mick Rodgers’ article in EBN.

Rocky Times for The Duck
Columbus, Georgia-based Aflac has certainly seen better times. Once a Dividend Aristocrat for increasing dividends 30 consecutive years in a row, Aflac’s stock fell 7 percent last week amid complaints and a lawsuit filed by representatives for a small group of brokers. The allegations made by nine brokers include:

Aflac released a statement saying the allegations against the company are false. According to the statement, Aflac intends to aggressively fight the allegations beginning with filing for their dismissal. The statement further says that the company has a “long history of operating with transparency and integrity, having been named by Fortune Magazine as one of the Best Companies to Work For for 19 consecutive years and a World’s Most Ethical Company by Ethisphere for 11 consecutive years.”

Bringing Smiles to Medi-Cal Patients – Maybe
Starting January 1, Denti-Cal restored benefits for many adult dental procedures. But the issue of coverage for Medi-Cal/Denti-Cal patients is a little more complicated than that.

A scathing report on Denti-Cal in 2016 by the Little Hoover Commission, an independent state oversight agency, found that only a quarter of California dentists participate because of low reimbursement rates and administrative hassles. And finding a Denti-Cal dentist in rural counties is too often impossible.

But California officials say they are engaged in a statewide outreach effort to recruit more dentists and simplify the provider obstacles.

And last year, Denti-Cal increased the rates it pays dentists for many procedures by 40 percent, a boost that was funded by the tobacco tax, Proposition 56, which voters approved in 2016.

Six Companies Step Up to Support Women In Insurance
Women in Insurance & Financial Services (WIFS) announced that six industry leaders have become 2018 partners with the organization to support the advancement of women in insurance and financial services. Continuing their commitment to furthering the WIFS mission to attract and advance women in insurance are Penn Mutual,  Prudential, Ameritas, Lincoln Financial Network – The WISE Group, Mutual of Omaha and National Life Group.

AmeriLife has appointed James “Jim” Quinn as its Chief Financial Officer to oversee its accounting, finance, tax and acquisition functions.

Disability Management Employer Coalition (DMEC) webinar —FMLA Communications
January 23, 9AM Pacific
Helen Applewhaite with the United States Department of Labor, and Angela Ripper with Unum, will provide Family Medical Leave Act (FMLA) guidance and best practices. They will use the DOL Employer’s Guide to the Family and Medical Leave Act, case law and real-world examples to describe how communication regulations are applied in the workplace. To register, call 202-554-6796.