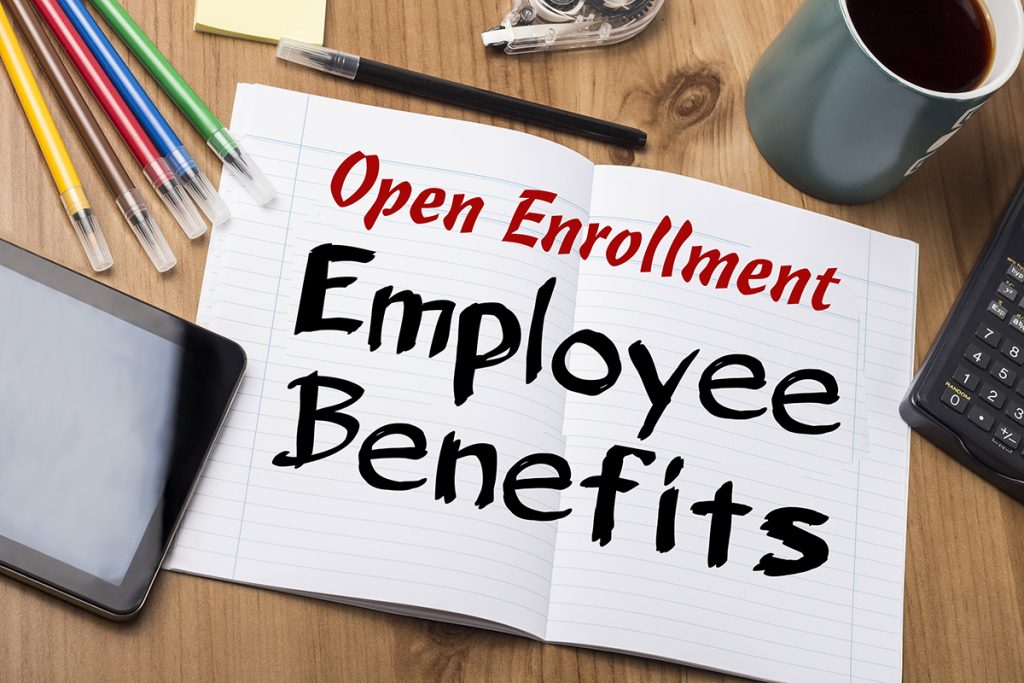 Nearly half of employees are stressed by the open enrollment process and only half are confident about the benefit decisions they made last year, according to a study by MetLife. Millennials are the most stressed and confused. When asked about the most effective benefit resources, respondents ranked one-on-consultations well above other resources. In fact, Millennials led their generational counterparts in valuing one-on-one consultations. However, only half of employers offer one-on-one consultations. Sixty percent of Millenials consult with their families and friends on benefits. MetLife says that employers need to help their employees connect the value of non-medical benefits to their day-to-day lives. Employers should also do the following:

The survey also reveals how employees feel about their benefits:

Agency Employee Violates Trust
Melissa Grimmesey, 42, of Santa Maria, was hit with nine felony charges. Grimmesey was a former licensed insurance agent and customer service representative for an insurance agency in the Santa Barbara area. She allegedly stole premiums from policyholders who paid cash for insurance premiums. She then used other customers’ credit cards to repay the stolen premiums. Grimmesey allegedly recorded the cash payments in the computer system and then deleted the transactions to avoid detection. Grimmesey’s alleged crimes left some policyholders without coverage and at financial risk. The case is being prosecuted by the Santa Barbara County District Attorney’s office.

CHA Launches Medicare Website
Making Medicare understandable and accessible is one of the goals of the newly launched website for California Health Advocates. “With close to 1,000 pages of quality and reliable Medicare information for consumers and professionals, we strive for a site that is both welcoming and easy for people to get their questions answered and equipped with helpful resources,” said Tatiana Fassieux, Board Chair for California Health Advocates. For more information, visit cahealthadvocates.org.

More Insurers Settle  Regarding the Death Master File
The California Dept. of insurance reached settlements with Hartford, Securian, Great American, and the Standard over the Social Security Administration’s Death Master File database. The insurers agreed to compare all company records against the Death Master database to determine whether there are unclaimed death benefits and conduct a thorough search for beneficiaries. Hartford will pay a settlement of $2.1 million, Securian will pay $625,000, Great American will pay $400,000, and the Standard will pay $277,000 to the states participating in the national investigation. All four insurers agreed to reform their business practices to benefit policyholders and use the database to search for policyholder beneficiaries that might be owed benefits from a life insurance policy.

The Death Master File provides insurers with the names of deceased people in the U.S. who have Social Security numbers. Until recently many life insurers used it just to identify deceased annuity holders in order to stop making annuity payments, but not to pay life insurance benefits.

A national investigation and settlements by state insurance commissioners led to life insurers returning more than $6 billion to beneficiaries nationwide and over $2.8 billion delivered to the states’ unclaimed property programs, which continue efforts to locate and pay beneficiaries. To date, over 78% of the life insurance market has agreed to comply with the law through settlements or has been found in compliance.

The Life Insurance Direct Marketing Association (LIDMA) is accepting applications from life insurance companies for its Seal of Approval. It covers technological and procedural enhancements in the customer buying and fulfillment experience. The deadline is August 26, 2016. The Seal of Approval will be awarded in the following categories this year:

Many health policy experts warned that the Affordable Care Act would lead to massive consolidation in the health care industry, including hospitals, physicians’ practices, and especially health insurers. Now the Justice Department is pushing back by opposing the mergers of four large health insurers—Aetna with Humana and Anthem with Cigna. The real question is whether the insurers will continue to sell in the exchanges if they aren’t allowed to merge?

And politics is certainly at work in this instance. President Obama promised the country that his health care legislation would increase competition and lower health insurance premiums. Now that just the opposite is happening, his administration is trying to limit the fallout and appear to be fighting for the consumer. But blocking the mergers will likely hurt consumers and competition.

Health insures are fleeing the Obamacare exchanges because of financial losses. A recent McKinsey & Co. survey found that health insurers selling in the individual market—where individuals buy their own coverage, usually through Obamacare exchanges—lost $2.7 billion in 2014. Those loses only compounded in 2015. The Hill reports that Humana “is pulling out of Obamacare plans in all but a handful of states after a year of nearly $1 billion in losses.”

Aetna said it lost about $140 million on the individual market in 2015. The Texas Blues Cross parent company, which controls Blues plans in five states, lost a reported $2 billion—$720 million just in Texas.

Oscar, a start-up health insurer that was supposed to bring new thinking to the individual health insurance market lost $105 million on Obamacare exchanges in 2015—and that was in just two states, New York and New Jersey.

UnitedHealthcare, the largest health insurer, reported last January that it lost $720 million in 2015 selling individual health insurance on the Obamacare exchanges. And about $1 billion when 2014 and 2015 were combined. And 16 of the 23 nonprofit Obamacare co-ops—which were the left’s consolation price for not getting their “public option”—have gone under, with more collapses on the way.

The left has long wanted to “take the profits out of health care,” and Obamacare seems to be doing exactly that. Obama officials dismiss the health insurer losses, claiming that many of the insurers are still profitable. But that’s because health insurers often have several lines of business, some of which may be profitable even as they lose hundreds of millions of dollars selling in Obamacare exchanges. No responsible board of directors will let such losses continue indefinitely. Larry Levitt of the Kaiser Family Foundation has been quoted as saying, “Something has to give. Either insurers will drop out or insurers will raise premiums.” And that’s exactly what we’re seeing. Nationwide, there was a 12% decline in plans in 2016 as compared to 2015, and that includes a 40% decline in PPO plans. There will be even more exits in 2017. Prior to Obamacare there were 18 insurers offering individual coverage in Kansas. Today there are three. The Obama administration initially praised health insurance competition in Maricopa County, Arizona. This year there were eight plans available on the Obamacare exchange; next year there will only be four—unless Aetna drops out, too. And insurers that choose to remain are increasing premiums. Texas Blue Cross has requested an increase of up to 60% for its 2017 premiums, and Arizona Blue Cross requested a 65% increase.

We know Humana, without the merger, is pulling out. Aetna claimed for months it would remain in the Obamacare exchanges, but is now saying it may scale back. And Anthem announced recently that it will only expand into other exchanges if it’s Cigna merger goes through. In other words, the Obama administration’s efforts to keep four insurers from becoming two may mean that only one or none will continue selling on the Obamacare exchanges.

Expect to see even fewer insurers participating and higher premiums as financial losses increase, especially if the Obama administration continues its efforts to stop money-losing insurers from merging. Policyholders will likely be receiving the notice that their premiums are rising or policy is being canceled in September or October—just before the election.

Merrill Mathews is a resident scholar with he Institute for Policy Innovation at ipi.org.

Group Critical Illness & Accident Coverage
MassMutual introduced group critical illness and accident policies through employers, directly or through MassMutual’s BeneClick! integrated benefit exchange. The coverage is voluntary or on an employer-paid basis. The policies cover employees and, where available, spouses and children. For more information,visit massmutual.com.

Digital Business Card
Agent Review teamed up with Inigo to offer a digital business card app. It sends designed contact information to anyone you meet while importing contact info about your new acquaintance. Agent Review is an online platform that allows consumers to search and review local agents. All members get unlimited custom business cards, tracking of who clicks and views their cards, and downloadable data. For more information, visit agentreview.net.

Online Hospital-Shopping Platform
DoctorGlobe offers an online U.S. domestic hospital-shopping interactive platform for self insured employers. DoctorGlobe’s bonus-incentive strategy replaces the traditional approach by waiving out-of-pocket costs for the plan participant, and providing a cash award as a part of the corporate savings. DoctorGlobe ranks hospitals on distance, cost, and quality, offering plan sponsors the choice to work within their provider network, with out-of-network providers, or both. For more information, visit doctorglobe.com.

Pet Insurance
Figo Pet Insurance created the Pet Cloud App. You can keep all of your pet’s records, locate dog parks, or find your pet with their pet tag. Figo offers pet insurance plans averaging less than a $1.50 a day. It covers all non-pre-existing illnesses or injuries with no limits on claim payouts. It reimburses up to 100% of the vet bill; is accepted at any licensed veterinary practice, emergency hospital, or specialist; and has a yearly deductible instead of the traditional (and more expensive) per-condition deductible. For more information, visit https://figopetinsurance.com.