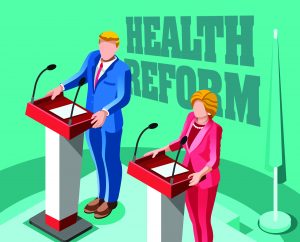 For more information, visit the commonwealthfund.org.

CDHP Enrollees Spend 1.5 Times More Out-of-Pocket
People in consumer driven health plans (CDHPs) spent 1.5 times more out-of-pocket compared to people in traditional health plans, according to a study by the Healthcare Cost Institute (HCCI). The study examines health care use and spending from 2010 to 2014 for people under 65 who are enrolled in CDHPs. They had higher out-of-pocket spending on deductibles, copays, and coinsurance (excluding premiums). They were responsible for nearly a quarter of their medical costs, compared to 14% for those enrolled in a traditional plan. They made 8% fewer doctor visits and paid $58 more out-of-pocket. They made 10% emergency room visits and paid $50 more out-of-pocket.

Enrollment in CDHPs has been increasing steadily within HCCI’s employee-sponsored insurance population. More than a quarter had a CDHP in 2014, compared to just 15% in 2010. Fewer total dollars were spent on health care for people with CDHPs, in part because people with CDHPs tended to use fewer health care services. The study also reveals the following about people in CDHPs:
• They used 10% fewer health care services, and had 20% fewer prescription-filled days.
• They spent $1,030 per person out-of-pocket annually on care, compared to $687 for the traditional plan population. In 2014, their spending totaled $4,481 per person compared to $5,140 per person for a traditional plan.
• Of the five age groups studied, the 19 to 25 group was the only one in which CDHP consumers used more health services and had slightly higher per capita spending than their non-CHDP counterparts. They also spent 81% more out-of-pocket, which is the largest spending difference among the five age groups.For more information, visit www.healthcostinstitute.org.

Churning Remains a Problem Under the ACA
Since the Affordable Care Act (ACA) was passed in 2014, about one in four low-income adults in three states experienced changes in their health insurance coverage—known as “churning,” according to a study from the Harvard T.H. Chan School of Public Health. While the ACA has expanded health coverage to millions, maintaining stable coverage remains a challenge. Benjamin Sommers, assistant professor of health policy and economics and lead author of the study said, “The ACA has not worsened the problem of churning, as some had predicted, but it hasn’t fixed it.” He explained that people who switched coverage reported frequent periods when they didn’t have any insurance, had high rates of skipping medications, had to switch doctors, and got low-quality care. Previous research suggested that churning was common even before the ACA, particularly among lower-income individuals. About half of the churners who had a gap in insurance coverage said that their coverage change hurt the quality of their medical care and their health. Twenty percent of  those who switched without a gap in coverage said the same .

Researchers surveyed more than 3,000 low-income adults in late 2015 in Arkansas, Kentucky, and Texas—three states that have responded in three different ways to the ACA’s option of expanding eligibility for Medicaid. Kentucky chose a traditional expansion of Medicaid; Arkansas chose an expansion that enrolled Medicaid beneficiaries in private plans through the federal health care marketplace; and Texas chose not to expand. People in Texas were more likely to experience negative effects of coverage changes than those in Kentucky and Arkansas.

Nearly 25% of respondents in each state switched their health coverage during the previous 12 months—similar to the percentage who did so before the ACA’s coverage expansions. About 20% of those who changed coverage were previously uninsured. Other common reasons for churning included having a change in a job or job-related coverage, losing eligibility for Medicaid or other federally subsidized health insurance; or not being able to afford previous coverage. Nearly 20% of those who switched health coverage had to change at least one doctor; 9% had to change a primary care doctor and a specialist; 16% had to switch or change their prescriptions; and 34% skipped doses or stopped taking medications. For more information, visit hsph.harvard.edu.

Some Co-Op Plans Face Financial Trouble
Six of the seven U.S. life/health financial impairments in 2015 were for consumer operated and oriented plans (co-ops) formed under the Affordable Care Act (ACA). The A.M. Best report explains that a company faces an impairment when a court order places it into conservation, rehabilitation and/or insolvent liquidation. The last time there were seven or more health insurer impairments was in 2008.

From 2000 to 2015, 143 life/health insurers became impaired. Seventy percent were accident and health or health insurers while 16% were small life insurers primarily focused on selling lower policy value industrial/burial or stipulated premium business in the southern United States. The remaining 14% were fraternal entities; annuity writers; and other life or combined life, annuity, and health businesses. Fraud or alleged fraud caused nine impairments while significant investment losses, at least partly, caused eight impairments. Six companies ran into trouble after rapid growth, eight were undone by affiliate problems, and one had a reinsurance failure. One impairment resulted from large claim over payments due to system errors, and other involved a mortgage lender that failed after an unlicensed push into fixed rate annuity products.There were 76 health insurer impairments during the study period. Sixty-six of them did business in one state, and five did business in two to five states. For more information,
visit www3.ambest.com.

Seventy-two percent of Americans live within five miles of a hospital. But in many places,
patients must travel further to have their surgical procedure at a five-star hospital. For example, in Tampa, Fla., only 19% of people have to drive more than five miles to get to a hospital performing
total knee replacement, but 100% have to drive more than 25 miles to be treated at a five-star hospital for total knee replacement. Healthgrades released a tool that helps consumers assess their risk for six common surgical procedures. The Risk IQ Tool provides guidance to help consumers select a high-quality hospital and physician for their procedure. For more information, visit healthgrades.com.

Word & Brown Gets Gold Stevie Award for Great Employers
Word & Brown Companies has been named employer of the year in the insurance category at the inaugural Stevie Awards for Great Employers. The Stevie Awards for Great Employers recognize the world’s best employers and the human resources professionals, teams, achievements, and HR-related
products and suppliers who help to create and drive great places to work. Nicknamed the Stevies for the Greek word meaning crowned, the awards were presented to winners at a gala ceremony at the Marriott Marquis Hotel in New York City, Sept. 30. Among the judging panel feedback on Word & Brown’s entry were, “The Company has achieved outstanding performance in the field of human resources management and provided all possibilities to support career development and great programs, benefits,
and recognition.” For more information, visit www.StevieAwards.com.

New Law Affects Existing Work Comp Policies
Beginning January 1, 2017, all new and in-force business workers’ comp policies must cover certain private corporation officers and directors. They must also cover working members of partnerships and limited liability companies who may have been excluded from coverage. Before AB 2883 was signed into law, officers, directors, and working partners did not have to be covered under the business’s workers’ comp policy unless they chose to be covered and were not listed on a limiting and restricting endorsement. They are now required to be covered under the employer’s workers’ comp policy unless they meet a narrower definition of “excluded employee.” Even then, they can only opt out of coverage by signing a waiver under penalty of perjury and filing the waiver with their employer’s insurer. Insurance companies must identify and notify each employer that may have employees that were excluded from coverage and are affected by the new law. Insurers must also determine and report the premium and loss experience associated with those who have not chosen to get the coverage.

Tool to Manage Health Care Finances
Obeo Health is adding online tools to help employees manage their healthcare finances. An employer dashboard provides visibility into how much employers and employees spend on their health care services. The dashboard can break out spending in over 20 dimensions, such as gender, age, conditions, geography, benefits, as well as top diseases and medicines. The reports can also produce comparisons against previous years’ spending so employers can better understand changes in their population. With Obeo Health, medications and prescribing instructions are entered automatically and alerts are provided through our smart-phone app. For more information, visit www.obeohealth.com.

Survivorship Life
John Hancock added a wellness feature to its Protection survivorship indexed universal life products. The Vitality program enables policyholders to save money and earn rewards for healthy living. Policyholders can save on their annual premiums and earn rewards by engaging in everyday activities that help them stay healthy, like walking, exercising, and buying healthy food. For more information, visit www.JHRewardsLife.com.

Voluntary Benefits
MORE Health introduced an employer or employee-paid voluntary benefit that’s designed to integrate into any health plan, called “MORE Benefits.” When an employee is diagnosed with a serious illness, such as cancer or heart disease, one of MORE Health’s expert physicians, selected from highly respected medical institutions, can work directly with their treating doctor. Together they’ll work to ensure that the patient gets an accurate diagnosis, and will recommend the optimum treatment plan. MORE Benefits complements critical illness insurance and can help employers deal with narrowing networks. For more information, visit www.morehealth.com

Life Insurance Sales Tool
iPipeline is launching the iGO e-App for iPad in the fourth quarter of 2016. It is used by agents for the selling and processing of life insurance products. iPipeline is currently taking orders for the new app with implementations being scheduled for early 2017. The new disconnected app will be deployed via downloads from a carrier or iPipeline-hosted website. It operates as a single-carrier selling and processing solution. For more information, visit www.ipipeline.com.