Votes are still being counted, but congress has returned after the pre-election hiatus. And while many lawmakers may be on their way out the door, 2018 isn’t over as far as healthcare news. In fact, the Washington Examiner reports that we should watch for changes in the Medicare donut hole, since congress and the White House have to make a new deal by Dec. 7 to fund the government: “There is potential for some healthcare items to be added into this package. The most controversial would be an attempt by the pharmaceutical industry to roll back a requirement starting in 2019 that forces drug companies to give a larger discount for certain Medicare drugs.”

The omnibus eight months ago included an amendment that alters coverage for the Medicare donut hole. Starting in 2019, pharma companies were supposed to offer a 50 percent discount for any drugs in the donut hole. However, the March omnibus changed that figure to a whopping 70 percent. The pharma industry has been trying ever since to improve their outlook. Two months ago, pharma lobbyists reportedly tried unsuccessfully to bring the discount down to 63 percent. Pharma’s opponents are now warning that the lobbyists will try to work their magic to impact the discount in December’s spending deal. Read more here.

The Industry and Fire

This Motherboard article has nothing to do with life and health insurance, but in light of current events you may find it interesting to understand the role the insurance industry has with private firefighting. As well as how our federal government impacts fire fighting. From the article: “The need for a private firefighting industry is fueled by the growing risk of climate change-related damages, which is exacerbated by defunding and undermining action related to climate change at the federal level.”  Moving right along…

If you’re going to the National Association of Insurance Commissioners meeting on Thursday, head’s up. Representatives from various environmental groups will hold a public event featuring activists dressed as recognizable insurance mascots to catch the attention of insurance representatives.
The protest is scheduled for:Thursday, November 15, 11:45am-1:00pm

Gemini Health announced a new initiative to help lower prescription drug costs by working with Surescripts to deliver price transparency at the time of  prescribing. Gemini’s Drug Cost Transparency Services will be delivered via Surescripts Real Time Prescription Benefit service integrated with electronic health record (EHR) software companies representing the vast majority of U.S. physicians. Clients for the new service include Blue Shield of California as well as other healthcare payers, their providers and members.

Aflac announced the initial launch of its latest lump sum critical illness insurance policy. The product is direct-to-consumer and is aimed at freelancers, contractors and self-employed solopreneurs. It’s not yet available in California. No word from the company if there are plans to offer it here.

Caregivers in the United States are getting younger and continue to struggle with stress and depression, no matter what their age, according to Genworth’s new Beyond Dollars Study 2018. The study, which is conducted every three years, documents the emotional, physical and financial impact of caregiving on families beyond the cost of long term care services, which the company tracks in its annual Cost of Care Survey.

Among highlights of this year’s Beyond Dollars Study:

In addition to mental health issues, the Beyond Dollars Study found that caregiving can have an impact on other aspects of caregivers’ lives:

Bob Carroll has been appointed as Head of Workplace Distribution for Massachusetts Mutual Life Insurance Co.   Carroll is responsible for executing the workplace distribution strategy, continuing to develop sales talent, driving revenue and growing MassMutual’s share of the retirement and worksite markets. Additionally, Carroll will represent MassMutual as a thought leader in the retirement and voluntary benefits markets, and partner with key accounts and relationship management teams to drive business growth and retention.

EVENTS
NAC3 Cryptocurrency Conference
December 8, Las Vegas
Come hang with Crypto Bobby, Ready Set Crypto, the Crypto Street Podcast crew and many more. This event’s focus will be on investment and how to take your gains to the next level in the current market. Register now for the early bird rate of $97. More info here. 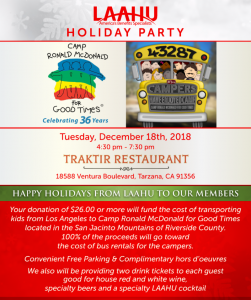 LAAHU Annual Conference — Save the date!

LAAHU’s Annual Conference is the largest in the state and includes updates from DC, breakout sessions for IFP, small group, large group and medicare. It’s a don’t miss! More info to come soon.