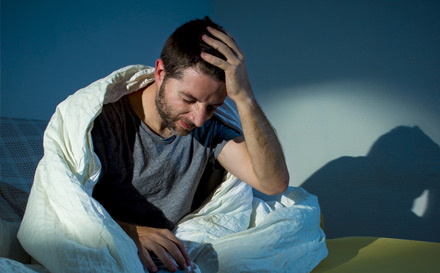 IN CALIFORNIA
Californians With Mental Health Issues Face Discrimination
Many California residents with mental health issues report discrimination in personal relationships and in the workplace, according to a RAND Corp. study. Just 41% of those surveyed say that people are caring and sympathetic to those with mental illnesses while 81% say that people with mental illness face prejudice and discrimination. More than two-thirds of said they definitely or probably would hide a mental health problem from co-workers or classmates, and more than one-third said they would hide their condition from family or friends.

Nearly 90% who had a mental health problem faced discrimination. Most often, they faced discrimination in intimate personal relationships, but they also reported high levels of discrimination at school, in the workplace, and from health care providers and law enforcement officials. However, Californians who are facing psychological distress are showing signs of resiliency. More than 80% of those surveyed have a plan for staying or becoming well and say they can meet their personal goals. In addition, about 70% of those surveyed said that they are satisfied with life. The large majority of respondents say that recovery from mental illness is possible and say they would seek treatment for a mental health problem if needed.

Proposition 63, which imposed a special state tax on people with incomes over $1 million, funds the California Mental Health Services Authority (CalMHSA). Wayne Clark, executive director of CalMHSA said, “This new report…highlights the need to confront stigma, and the opportunity to promote mental health in our state with the statewide stigma reduction efforts offered by CalMHSA.” The survey found that the mental health education campaign mounted by CalMHSA is reaching people facing psychological distress. About one-third of the people surveyed had been reached during the previous 12 months by the early intervention efforts, such as viewing the campaign’s documentary on ending stigma about mental illness. In addition, other activities that could be related to the CalMHSA efforts reached nearly 90% of the group during the previous 12 months. For more information, visit rand.org/health/projects/calmhsa.html.

Online Pharmacy
PillPack, an online pharmacy, has launched its service in California. Customers can get pre-sorted medications, including prescriptions, over-the-counter medications, and vitamins, delivered in individual packs organized with the date and time to take the pills. PillPack dispenses medications into multi-dose packs. These pre-sorted medications arrive packaged and labeled with the date and time each dose should be taken. Inhalers, creams, or as-needed medications can also be included in the shipment. PillPack manages refills for customers by coordinating with physicians and insurance providers. PillPack pharmacists are available to answer questions 24 hours a day, seven days a week. PillPack accepts most prescription drug insurance plans, including most Medicare Part D plans. California is the 47th state in which PillPack is licensed. For more information, visit pillpack.com.

Platform to Bring Price Transparency to the Consumer-Driven Healthcare Market
Doctible unveiled its first product, an online healthcare marketplace that displays cash prices from doctors and enables consumers to shop for healthcare based on quality, price and location. Doctible, an online healthcare network based San Diego, got $700,000 in seed funding led by Healthcare-IT investor, Bootstrap Incubation, with participation from Tech Coast Angels, in addition to angel investors from Facebook, Apple and prominent industry executives. Doctible was founded by Ajit Viswanathan and Leon Hu on the principle that people should have access to healthcare, and choice at affordable prices. By enabling price transparency,  it is geared to 33.9 million Americans who are on high deductble health plans (HDHP). Doctible launched with 13 specialties including Optometrists, Chiropractors, Dermatologists, Dentists, psychiatrists, podiatrists and other types of providers in the San Diego area. The website enables users to view various attributes of healthcare professionals including their prices prior to booking an appointment online. The platform is free to use and has more than 500 doctors in the San Diego region. Doctible says that by booking via its site, users can save up to 40% on what they would pay with insurance. Users can see a doctor of their choosing without having to worry if the doctor they choose is in their health insurance network. For more information, visit doctible.com or call 1-800-380-6071.

Rick Johnson, senior director of the healthcare practice at J.D. Power said, “Marketplace shoppers are very cost-sensitive. Unlike many traditional health plan members, who are often tied to a single employer benefit offering, Marketplace members have an option to switch plans annually, allowing them to shop for the most affordable or the most valuable plan. Plan providers need to demonstrate the value of their plan by clearly communicating coverage and benefits. Additionally, auto re-enrollment is a great way to ease the re-enrollment process and increase member retention.”

Bringing Marketplace Competition to the ACA
As Congress debates health care reform, the Committee for Economic Development of the Conference Board (CED) offers the following prescription for bringing market-based competition to the post-Affordable Care Act (ACA) health care system:

Ron Williams, Co-Chair of CED’s Health Care Reform Subcommittee and former CEO of Aetna said, “Health care is a very personal issue, which is why having a fixed tax credit decoupled from the state or federal exchange will provide the consumer with significantly broader choice.” For more information, visit ced.org.

An Argument for Deregulating the Exhcanges
Running an Obamacare health-insurance exchange can present such formidable and costly challenges that Hawaii, New Mexico, Rhode Island, and other states are considering shutting theirs down and defaulting to the federal exchange, just as Oregon did last year. But even the federal exchange is plagued with serious problems—including trouble verifying the income of applicants, checking their eligibility for state Medicaid programs, and determining whether or not workers’ employers offer affordable, qualified insurance.

One simple solution would solve these and other Obamacare problems overnight, according to health policy expert John C. Goodman, author of the new book A Better Choice: Healthcare Solutions for America (Oakland, Calif.: The Independent Institute).

Goodman suggests deregulating and denationalizing the exchanges, and converting the tricky-to-calculate Obamacare tax credits into a tax credit that is the same for everyone, independent of income. “With a universal tax credit, all these problems go away,” Goodman writes.
Goodman argues that ending the Obamacare mandates and subsidies and adopting a uniform tax credit (equal to the cost to Medicaid of a new enrollee) would end the perverse incentives that encourage employers to keep the number of workers on their payroll small, to switch full-time workers to part-timer status, or to rely heavily on independent contractors and temp workers.

Goodman’s book also recommends converting all the various medical savings accounts into a more consumer-friendly Roth health savings account; allowing everyone the right to buy Medicaid or opt out of it and to use the money to buy private insurance; and encourage insurers to offer plans that cover changes in a consumer’s health status. For more information, visit independent.org.

Teamsters Statement on Repealing Health Benefits Tax
The following is the statement of Teamsters General President Jim Hoffa in response to the introduction of the “Middle Class Health Benefits Tax Repeal Act” by Rep. Joe Courtney (D-Conn.). The bill would eliminate an excise tax set to be charged on those enrolled in high-quality health care plans provided by the Teamsters and other organizations. “Rep. Courtney’s bill stands up for working Americans. The health care excise tax set to take effect in 2018 is an onerous charge that will hit many middle-class families hard in the pocketbook, all because their health insurance is considered too good. It is unconscionable that some hardworking Americans will have to pay a 40 percent penalty on benefits they’ve fought hard to receive. While those pushing the tax have made it sound like it will only apply to overly generous health plans, many working families set to be affected live in high-cost areas. Their benefits are reaching the price threshold due to age, gender, geography, occupational industry and plan size. In other words, things that are beyond their control. Congress must stop the health excise tax before it hampers a majority of the U.S. workforce. I applaud Rep. Courtney for taking action to do so.” For more information, visit facebook.com/teamsters.

AARP volunteers and staff are raising awareness of these issues:

The Case Against Restrictive Drug Plan Regulations
Increasing unnecessary regulations on drug plans could inflict higher costs on the 220 million Americans who get their medications through a managed drug plan, according to a report by National Center for Policy Analysis Senior Fellow Devon Herrick. Herrick said, “Blatant protectionism through restrictive drug plan regulations may be touted as consumer protections, but more often than not they are designed to benefit local pharmacy service providers at the expense of consumers.”

Drug therapy is the most cost-effective way to treat most conditions. Yet recent legislative proposals aim to weaken or prohibit the agreements health plans negotiate with pharmacy networks: In early 2014, the Centers for Medicare and Medicaid Services proposed a ban on exclusive preferred networks, in which seniors are offered lower cost-sharing in return for patronizing a preferred pharmacy network. Many industry observers said the proposal came from lobbying by pharmacy trade groups that preferred to avoid competitive bidding for inclusion as a network provider.

Also in 2014, California debated and narrowly avoided perverse regulations that would have forced health plans to use unqualified pharmacies to administer the most advanced specialty drug therapies and made it harder to offer discounts for mail-order drug delivery to enrollees’ homes.

Arkansas just passed a law increasing the paperwork burden on drug plans and allowing pharmacies to refuse to fill those prescriptions deemed unprofitable — despite previous agreements to participate in the plan. For more information, visit ncpa.org/pub/st365.

Mobile Disability Insurance Quote Tool
Guardian Life introduced “Guardian DI QUICKQuote.” It allows financial professionals to access product information and pricing to provide on-the-spot quotes for individual disability insurance. Users can plug in their age and expected income needed to retain their lifestyle and get a quote instantly. Brokers can generate a quote on a smart phone and e-mail it directly to a client. For more information, visit GuardianLife.com.

Telemedicine
DentalPlans launched “DP SmartHealth,” which offers significant savings on health and wellness. The plan provides access any time to board-certified family practitioners, primary care physicians, and internists through phone or video consultations. They can diagnose, treat, and write prescriptions (when medically appropriate) to manage common problems, such as flu, cold, sinus and respiratory infections, allergies, poison ivy, and other non-emergency illnesses. DP SmartHealth also provides additional discounts on essential services with a dental savings plan, reduced rates on vision – including Lasik – hearing, counseling and alternative health services, and deep discounts on a wide assortment of other popular wellness services and products. The plan includes emergency medical travel assistance. Annual plans may be purchased through DentalPlans, for $199.95 for an individual plan or $299.95 for a family of four, plus a one-time non-refundable $20.00 processing fee. Members save 10% to 60% off dental services with Careington’s CAREPOS plan. For more information, call 800-441-0380 or visit dentalplans.com.