USE TO GET BETTER LIFE INSURANCE RATES

Nearly 60% of people said they would fib about using marijuana to get lower life insurance rates or would be hesitant to buy a life insurance policy even if they used marijuana legally, a Forbes Advisor survey found.

The survey asked 2,000 people their thoughts on how marijuana use intersects with life insurance, as well as how they felt about using life insurance underwriting factors unrelated to health, such as credit histories and driving records.

Findings come at a time when the life insurance industry is still sorting out pricing protocols for pot use and as state legislators rally to legalize marijuana in every state. Recreational marijuana use is currently legal in 18 states and medical marijuana is legal in 37 states. Both types of use are legal in Washington, D.C.

And 59% of respondents said if they used marijuana legally, they would pause before applying for a life policy.

To what extent do you agree or disagree with the following statement: I would be hesitant to apply for life insurance if I used marijuana legally. 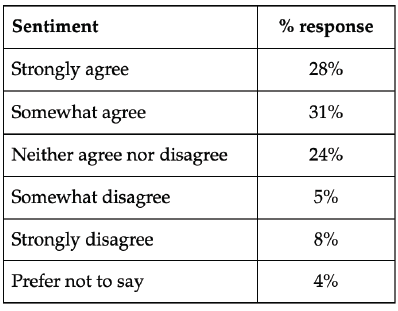 Why would you be hesitant to apply for life insurance if you used marijuana legally? 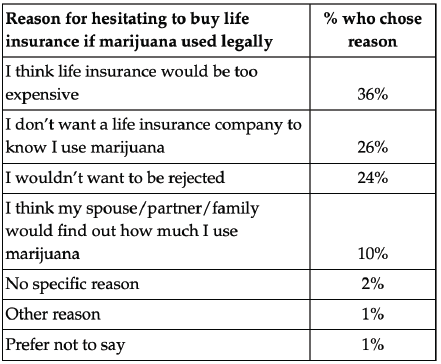 Among people who would hesitate to apply for life insurance, cost was the main stumbling block — they think life insurance would be too pricey.

Others had a fear of rejection: 24% said they didn’t want to have their application turned down for using marijuana.

Many agree medical, recreational pot should affect quotes
Despite saying they wouldn’t admit marijuana use on their application or would opt out of buying a policy because of marijuana use, most Americans agree that it should be factored into life insurance pricing.

Many Americans (60%) are OK with including recreational pot use in life insurance underwriting. Only 13% weren’t fine with it.

To what extent do you agree or disagree with the following statement: Recreational marijuana use should affect someone’s life insurance quotes. 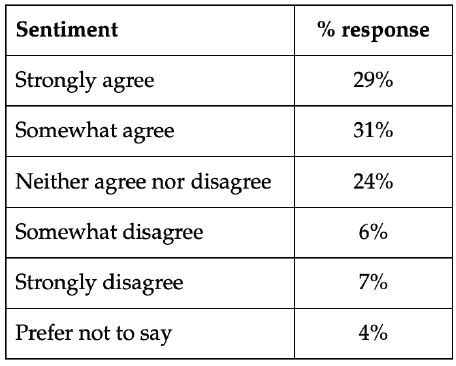 Among those who think recreational marijuana use should not be a part of pricing policies, legalization and privacy issues were the top reasons for excluding marijuana from underwriting life insurance.

Why do you think recreational marijuana use should not affect life insurance quotes? 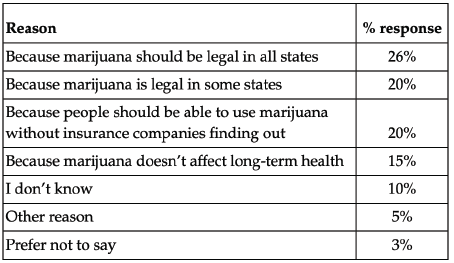 Here’s the percentage by region who think recreational marijuana should not affect life insurance quotes because it should be legal nationwide:

Only half of people surveyed (50%) knew that smoking pot affects life insurance rates. Fewer were aware that other types of marijuana use can be used in underwriting, such as vaping (46%) and edibles (44%). Many people (44%) also incorrectly thought that life insurance rates can go up if you start using marijuana after purchasing the policy.

Less than half (41%) knew opioid use (such as heroin) can affect quotes for life insurance shoppers.

The survey also revealed that there is an even greater lack of knowledge about the use of factors unrelated to your health in determining the cost of life insurance. Less than a third of people knew that the following are generally considered by life insurance companies when setting quotes:

Survey methodology
This online survey of 2,000 U.S. adults was commissioned by Forbes Advisor and conducted by market research company OnePoll, in accordance with the Market Research Society’s code of conduct. Data was collected April 1-4, 2022. The margin of error is +/- 2.2 points with 95% confidence. This survey was overseen by the OnePoll research team, which is a member of the MRS and has corporate membership with the American Association for Public Opinion Research (AAPOR).

Editor’s Note: If an applicant states they are a non-smoker — of cigarettes or cannabis and THC or nicotine show up in the medical testing for underwriting a life policy, the consequence of being less than truthful could be increased rates, or worse, denial of payouts. Work with your life insurance professional for underwriting guidance. 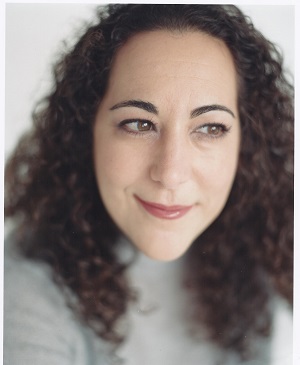 MICHELLE MEGNA is an insurance analyst at Forbes Advisor. She has been a journalist for over 30 years, writing about insurance for consumers for the last decade. Prior to covering insurance, Michelle was a lifestyle reporter at the New York Daily News, a magazine editor covering consumer technology, a foreign correspondent for Time and various newswires and local newspaper reporter.