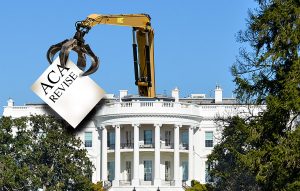 The White House launched an intensive effort to salvage support for the Republican plan to revise the Affordable Care Act, even as a growing number of lawmakers weighed in against the proposal.

After the Congressional Budget Office released its analysis showing that 14 million fewer Americans would be insured next year under the GOP plan, Vice President Mike Pence and Health and Human Services Secretary Tom Price came to Capitol Hill to rally backing for the proposal.

But widespread dissatisfaction among both House and Senate lawmakers — conservatives and moderates alike — showed no signs of dissipating, increasing the chance that House Speaker Paul Ryan’s proposal will have difficulty passing the House if it goes to the floor over the next two weeks — not to mention whether it can collect a majority in the Senate. The article is here.

Covered California Sounds Alarm After Budget Office Report
Covered California leadership finds the Republican plan to repeal and replace Obamacare will put health coverage out of reach of many in the state, according to its new studies on the Affordable Care Act’s benefits as well as a preliminary analysis of how changes proposed in federal law would affect enrollees.

The studies come one day after the Congressional Budget Office reported that 24 million consumers could lose coverage under the proposed American Health Care Act, which was introduced in the U.S. House of Representatives on March 6. Covered California implements the Affordable Care Act in the state.

“We are deeply troubled by the CBO’s finding that the amount of support provided for consumers to buy health insurance in 2020 under proposed legislation would be only 60 percent of what is provided under current law,” said Covered California Executive Director Peter V. Lee. “While we are still doing an analysis of the aggregate effects of this law on our consumers, the likely effect of basing subsidies on age alone — rather than considering income and where an individual lives — is that it will make coverage unaffordable and in many cases, put coverage out of reach.”

The Pre-Existing Condition Conundrum
Republicans want to continue to allow people with pre-existing conditions, ranging from serious ailments like diabetes and HIV to minor maladies such as acne or seasonal allergies, to maintain their coverage and the current draft of the American Health Care Act retains that provision. “We are protecting those patients living with pre-existing conditions,” said Rep. Greg Walden, R-Ore., at the start of his committee’s consideration of the bill. But  …. how? Read California Healthline’s Q&A here.

Lack of insurance coverage for birth control and the cost of birth control were listed among the most common hardships cited as barriers to access.

Pandia Health Birth Control Fund is a non-profit that provides free birth control and telemedicine consultations to uninsured women who could not otherwise afford those services. The fund is a project of the Center for Policy Analysis, which aims to get healthcare for all.

“For women, access to birth control and information about reproductive health is critical and directly affects quality of life,” said Pandia Chief Executive Dr. Sophia Yen. “At Pandia Health, we are committed to making women’s lives better, and the PHBC Fund helps us do just that.

We’ve had many individuals tell us that they want to contribute in some way to help women in need. That’s why we started the Pandia Health Birth Control fund – to help more women get access to the birth control they need and enable others to help in that mission.”

Pandia Health services are currently available in California with plans to expand across the United States this year.

Founded in 2012, Simple Recovery is an 18-bed residential and extended care program for men and women.

Employee Navigator Chief Executive George Reese said it was a milestone in the company’s progress.

“We’re excited to deepen our relationship with BenefitMall,” he said. “We believe that by democratizing access to the right technology solution we can help even the smallest insurance brokers compete and grow their book of business and are looking forward to leveraging BenefitMall’s national footprint to do so.”

The announcement follows integration between Employee Navigator and BenefitMall’s payroll product, PayFocus Pro. The new partnership will expand the tools available to brokers across the country who are increasingly turning to technology to solve an array of problems for their clients.

“BenefitMall is very excited to offer brokers and clients a payroll and benefits integration feature that will allow them to say goodbye to double data entry, expensive integration and payroll deduction reconciliation,” said Kevin Thornton, senior vice president of payroll sales of BenefitMall.

Employee Navigator is a software-as-a-service based benefits and HR platform in Bethesda, Maryland, that works with 20,000 employers and 3 million employees. The platform provides brokers and their clients with a single place to manage onboarding, online enrollments, ACA reporting and time-off tracking.

LimeLight, CaliforniaChoice Launch Platform
Benefits technology company Limelight Health in San Francisco and CaliforniaChoice, a private exchange in Orange, California, have launched a simple “quote-to-enroll” platform. When a user of Limelight’s Quotepad marks a proposal as sold, all sold case data will autopopulate into the CaliforniaChoice online enrollment system at www.calchoice.com.

Using Limelight Health technology, brokers can “quote-to-enroll” their clients in seconds, streamlining a complex process.  With added features such as real-time cost modeling to find the right plan and defined contribution strategy, automatic census data upload, and a visual dashboard interface, brokers have a one stop end-to-end solution that they can use on their desktop in the office or on their mobile devices anytime, anywhere.

“Using technology to further streamline the quote and enrollment process is just the next step in how brokers must learn to serve their clients in a technology-driven world,” said Ron Goldstein, chief executive of Choice Administrators, parent company of CaliforniaChoice. “The partnership between Limelight Health and CaliforniaChoice gives our brokers one more way to help their clients make better, faster, strategic decisions, with less administrative burden.”

Jason T. Andrew, chief executive and co-founder of  Limelight Health said: “This partnership with CaliforniaChoice is a natural fit.”

State Farm in Bloomington, Illinois, will continue its presence in Warrior Dash’s post-race festival. The insurance company will provide branded duct tape to secure shoes and laces, along with floor mats and seat covers to protect vehicles from the mud.

“We are thrilled for State Farm to continue their support of Warrior Dash,” said Ryan Kunkel, co-chief executive of Red Frog Events, the producers of Warrior Dash.

In addition to State Farm’s festival display, the Warrior Hangout offers something for everyone. Warrior Dash comes to Chino, California, on April 8.

Proton therapy is the most advanced form of radiation technology available to patients, because it allows doctors to precisely target cancerous cells with high doses of radiation while sparing nearby healthy cells and vital organs located beyond the tumor. The therapy benefits children with brain tumors and other cancers treated with radiation therapy, as it reduces harm to the child’s developing body and lessens the risk of secondary tumors later in life.