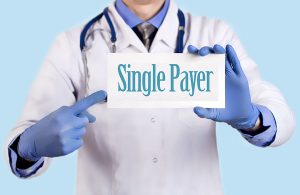 Legislation introduced in the state Senate would set California on a path toward the possible creation of a single-payer healthcare system ― a proposal that has failed to gain traction here in the past.

The bill, announced Feb. 17, is a preliminary step. It says that it is the “intent of the Legislature” to enact a law that would establish a comprehensive, single-payer health care program for the benefit of everyone in the state. The legislation, introduced by state Sen. Ricardo Lara (D-Bell Gardens), does not offer specifics of what the plan would look like, nor does it mention a timetable.

Medicare, the federally funded health coverage for the elderly, is often held up as a model of what a single-payer system might look like. The article is here.

California Broker Magazine Adds Daily Updates
California Broker, a magazine that covers agents and brokers who sell health, disability and other insurance products in the state, has added daily updates to the “Opinion” and “In the News” sections on its web page. Previously, the updates were made occasionally.

The increased coverage comes amid uncertainty over the political landscape in regard to the fate of the Affordable Care Act, or Obamacare.

In addition to checking the site for the updates, readers can follow the magazine on Twitter, @cal_broker_mag, or sign up for this weekly newsletter, Insurance Insider News, here.

Molina Profits Dive on Obamacare Programs
Molina Healthcare Inc. in Long Beach reported a collapse in profits for 2016 due to its experience with the Affordable Care Act Marketplace. The company also announced that it has not committed to continuing in the exchanges.

“While we experienced strong enrollment growth across our business and have made progress on our cost cutting efforts, results highlight the continuing challenges we face in the ACA Marketplace,” said J. Mario Molina, chief executive of Molina Healthcare Inc. “We are clearly disappointed in these results; however, we have identified and are committed to taking decisive steps to stabilize Marketplace performance; enhance our Medicaid profitability across Illinois, Ohio and Washington; and sustain our progress in Puerto Rico. Further, we continue to advocate for measures that the federal government can take to level the Marketplace playing field for insurers, like Molina, that offer effective, affordable health care to those who need it most.”

Income before income taxes decreased by $185 million to $137 million in 2016 from $322 million in 2015. The significant disparity in effective tax rates between years makes net income and diluted earnings per share difficult to compare between 2016 and 2015.

ACA Helps California Drive Uninsured to Record Low
The Affordable Care Act, the law that President Donald Trump and the Republican majority Congress are intent on replacing, has helped California reduce its uninsured rate to a record low of 7.1 percent.

That’s almost 10 percentage points less than in 2013, when 17 percent of Californians were uninsured and just before the health care law took full effect, according to a new survey released Tuesday by the Centers for Disease Control and Prevention.

The CDC survey, which covered the period of January to September 2016,  also showed a dramatic improvement nationwide, with just 8.8 percent of the country being uninsured, down from 14 percent in 2013.

Study Shows Covered California Most Effective Exchange
A five-state study of Obamacare health insurance exchanges finds California’s to be the most successful of the group. Researchers say the state’s experience may provide valuable lessons to lawmakers in Congress seeking to “repeal and replace” the federal health reform law.

California’s exchange, Covered California, has succeeded in large part because of its ability to retain a “relatively large” number of insurers compared with other states, according to the study, sponsored by the Brookings Institution.

Officials also boosted the fortunes of the exchange by aggressively negotiating premiums with insurers and imposing conditions on their participation. And Covered California helped facilitate the enrollment of low-income consumers, the study notes.

Equinox Cuts Benefits for Trainers
Trainers at Equinox, a national high-end gym chain that offers Kiehl’s body lotion, on-site athletic gear shops, and eucalyptus-infused towels in its lineup of membership amenities, are losing benefits. The company touts its personal trainers as “the best of the best” on its website. Training staff “will attend over 150 hours of internal education” over their careers, on topics that include kinesiology and orthopedic injury. This hip, luxe vision of fitness can cost more than $200 each month, depending on location and level of access.

But trainers say the luxe lifestyle doesn’t extend to them. The company, which has 36 locations in New York and 50 more around the country and internationally, has changed its health insurance offerings, making comprehensive medical coverage out of reach for many of its trainers.

On Jan. 1, many of the company’s trainers lost a big portion of their health insurance. In 2016, a personal trainer working at least 44 hours every two weeks at the company could choose from three medical benefits packages, according to internal Equinox documents obtained by Bloomberg. These plans included coverage for visits to primary care doctors and specialists, hospital care, mental health and substance abuse treatment, and prescription drugs.

Humana Leaves ACA Exchanges
After its merger with Aetna was called off, Humana Inc. said that it will stop offering commercial health insurance to individuals on state exchanges and buy back $2 billion in stock. Humana, which said it is owed a $1 billion breakup fee from Aetna, said it will focus on care for people living with chronic conditions moving forward. The company said it will give up its business of offering individual commercial medical coverage on the 11 state exchanges in which it currently operates as of Jan. 1, 2018.

“As an independent company, we will continue to innovate and sharpen our focus on the local healthcare experience of all our members, especially seniors living with chronic conditions,” Chief Executive Bruce Broussard said in the announcement. Humana plans to repurchase $2 billion worth of shares, with an accelerated repurchase of $1.5 billion in the current quarter.

Insurer Incentivizes Fitness, but Read the Fine Print
Wearing a fitness tracking device could earn you cash from your health insurance company. At first, this sounds lucrative for the people who participate, and good for the companies, who want healthier insurance customers. But it’s not quite so simple.

Under the program, people who have certain health insurance coverage plans with UnitedHealthcare can elect to wear a Fitbit activity tracker and share their data with the insurance company. The data would be analyzed by Qualcomm Life, a company that processes medical data from wireless sensors for doctors, hospitals and insurance companies. Depending on how active participants are, as measured by the Fitbit, they could earn as much as $1,500 toward health care services each year.

Interest in wearable fitness trackers is booming. More than half of people who already own one believe their devices will help them increase their life expectancy by 10 years – even though it’s impossible to actually know that because the clinical trials necessary would take at least a decade. Adding free money to the mix only makes the devices seem more attractive.

It’s important to consider potential costs to the patients. We are not far from days when wearable health devices will be able to diagnose illnesses. While this is not legal now, if Obamacare were repealed, as Republicans have vowed to do, corporate partnerships like this one with UnitedHealthcare and Fitbit could pave the way for insurance companies to use fitness tracker data to deny coverage or hike up rates for consumers. The article is here.

Scan Group Appoints Selecky and Rosenstock to Board
Scan Group in Long Beach, a senior-focused organization with the mission of keeping seniors healthy and independent, announced the appointment of two new board members: Christobel E. Selecky and Dr. Linda Rosenstock. Selecky and Rosenstock lend their extensive business, medical and academic expertise to Scan’s board, fortifying its commitment to ensuring California’s seniors have access to quality care and community services. In their new roles, Selecky will serve on the board’s finance and compensation committees, and Rosenstock will join both its audit and compliance committee and quality and customer experience committee.

“We’re thrilled to welcome Ms. Selecky and Dr. Rosenstock to the board and very much look forward to working collaboratively to advance healthy and independent living,” said Francesca Ruiz de Luzuriaga, board chairwoman.

Selecky is an executive and entrepreneur, with more than 30 years of experience within the healthcare industry. Through her independent consultancy, Population Health Strategies, Selecky helps management teams, companies and healthcare investors improve patient engagement, population health outcomes, and healthcare cost management. She serves on other boards for corporate and not-for-profit organizations, including Teleperformance, Satellite Healthcare and Verity Health Systems. Recognized for her contributions to driving the growth of the population health field, Selecky is a noted expert in healthcare strategy, disease and care management program development, market positioning, product planning and executive leadership.

Rosenstock is a former dean of the UCLA Fielding School of public health and current professor at the university. She is a noted authority in occupational and environmental health, as well as global public health and science policy. Previously, she served as the director of the National Institute for Occupational Safety and Health, adviser to the World Health Organization, chairwoman of the United Auto Workers/General Motors Occupational Health Advisory Board and chairwoman of the Association of Schools of Public Health. Rosenstock is a recipient of the Presidential Distinguished Executive Rank Award; was appointed by President Barack Obama to the Advisory Group on Prevention, Health Promotion and Integrative Public Health; and is an honorary fellow of the Royal College of Physicians and member of the National Academy of Sciences Institute of Medicine.

Do you have a News or People item for California Broker Magazine’s Insurance Insider Newsletter? Email to editor@calbrokermag.com with “Attn: Newsletter” in the subject line.