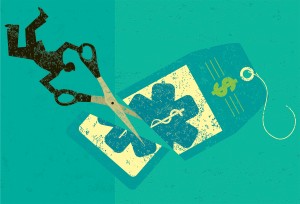 High-deductible health plans (HDHPs) are associated with lower health care spending, but not because consumers are shopping around for healthcare, according to a study published in the Journal of the American Medical Assn. (JAMA). Health insurance claims data indicates that these savings are due primarily to decreased use of care, and not because HDHP enrollees are switching to lower-cost providers. Enrollees in HDHPs are no more likely than those in traditional plans to consider switching their health care provider or comparing out-of-pocket cost among health care providers.

Researchers surveyed a nationally representative sample of insured adults from 18 to 64 who used medical care in the past year. They compared enrollees in HDHPs  with those in traditional plans on how much they shopped for care. The study found the following:

CMS underestimates costs for people with multiple chronic conditions to the tune of  $2.6 billion annually, according to a study by Avalere. In the spring of 2015, CMS finalized changes to the risk adjustment system, targeting chronic disease prevention programs. These changes significantly limit health plans’ early intervention efforts and seniors’ benefits. Under the risk adjustment model, CMS substantially under-predicts expenditures for providing care to beneficiaries, including those with the following conditions:

Last year, more than 340 members of Congress urged CMS to protect seniors’ coverage and provide stability to the program. Ahead of the upcoming February rate notice, more than 2 million seniors from AHIP’s Coalition for Medicare Choices have mobilized, urging Washington to defend the Medicare Advantage program from further payment cuts. To view the full report, visit ahip.org.

The Medicare Rights Center launched and updated version of Medicare Interactive, an online resource with hundreds of answers to Medicare questions. Users can quickly find Medicare answers through smart links to relevant pages and case examples, a roll-over glossary, and other helpful resources. For more information, visit www.medicarerights.org.

Young People After Obamacare: Some ER Visits Down, Others Way Up

Emergency room visits for adults 19 to 25 dropped slightly after implementation of the Affordable Care Act (ACA). But visits for mental illnesses and circulatory diseases increased significantly, according to a study published online this month in the Annals of Emergency Medicine. Study author Renee Hsia, MD, of the University of California San Francisco said, “Increased health insurance coverage reduced ER visits by young people for conditions that can be treated in office-based settings, but the lack of mental health resources continues to bring these patients to the ER in ever larger numbers. We also saw an increase in patients with diseases of the circulatory system, such as non-specific chest pain. There was a big decrease in ER visits for complications of pregnancy among young people, which is important as it was among the top reasons they visited the emergency room prior to the implementation of the ACA.” For more information, visit http://www.acep.org

Medicare supplement (Medigap) insurance remains a critical source of health coverage for low-income beneficiaries, particularly those living in rural areas, according to a  report from America’s Health Insurance Plans (AHIP). Enrollment has continued to grow over the past several years with more than 11 million Medicare beneficiaries enrolled in 2014. Medigap coverage helps cover significant out-of-pocket costs that are not covered by Medicare, such as deductibles, coinsurance, and copayments. As a result, Medigap beneficiaries are overwhelmingly satisfied with their coverage, and more than 9 in 10 would recommend Medigap to a friend or relative. The follow are key findings:

CVS Caremark To Drop 31 Prescription Drugs From Formulary in 2016

California Healthline finds sobering news about drug formularies. Pharmacy benefit manager CVS Caremark next year will omit 31 additional medications from its coverage, Reuters/New York Times reports. Among the medications removed from the PBM’s formulary are some commonly used diabetes and multiple sclerosis treatments, such as:

In addition, Caremark will no longer cover the erectile dysfunction treatment Viagra or the weight-loss drug Qsymia (Reuters/New York Times, 8/6). The formulary will also exclude coverage for:

Most beneficiaries who would like to use the excluded drugs will likely have to pay full price. However, there could be some exceptions, such as if patients and their physicians demonstrate medical need for a particular drug or if beneficiaries’ plans have special formularies that differ from the company’s general offerings (Loftus, Wall Street Journal, 8/6).

CVS spokesperson Christine Cramer said although certain drugs were removed, the PBM will continue to cover equally effective products with lower  costs (USA , 8/6). For example, while the company will no longer cover Pfizer’s Viagra, it will cover Cialis, a different erectile dysfunction treatment sold by Eli Lilly, according to Reuters/Times, PBMs often drop drugs from their formularies if they can no longer obtain them at favorable prices (Reuters/New York Times, 8/6).

Geoffrey Porges, an analyst at Sanford C. Bernstein, said excluding medications from formularies can be a potent weapon for PBMs. He anticipates the practice will grow, with the number of drugs excluded by at least one of the two largest PBMs in the U.S. projected to increase from 130 this year to 165 in 2016. Express Scripts CMO Steve Miller noted PBMs are often able to extract over-sized discounts from the pharma manufacturers by threatening coverage exclusions (Wall Street Journal, 8/6).

African-Americans, Latinos, and people living in lower-income households, as well as adults with a high school diploma or less visit the dentist less frequently than other racial, ethnic or socio-economic groups. African-Americans and Latinos are more likely to say that someone in their household visited a hospital emergency room for oral healthcare in the past five years.

Eleven percent of consumers have used daily deal sites for discounted dental services or would consider using them. Millennials (ages 18-34), African-Americans, Latinos, and men express the strongest interest in using these sites. Latinos are the most likely to say that a member of their household got dental care at a community clinic in the past five years. Consumers with a high school education or less are most likely to say they would be willing to receive treatment from a dental school or community health clinic to save money. For more information, visit www.fairhealth.org.

The Dental Solutions Blog offers these four ways to save money on your dental care:

Former Regulator Gets a Small Fine for Assisting Kaiser in Audit

An attorney who previously worked at a state regulatory agency has agreed to a fine after admitting she acted improperly during an audit of Kaiser Permanente, the Los Angeles Times reports. In September 2013, the National Union of Healthcare Workers filed a complaint against Kaiser alleging that the company hired Marcy Gallagher to impede an investigation into its practices. Gallagher previously served as an attorney with the California Department of Managed Health Care’s enforcement division. When Gallagher joined Oakland-based Kaiser, the company gained an employee with deep knowledge of how the state monitors it. She participated in at least eight reviews of Kaiser in eight years, according to Department of Managed Health Care spokeswoman Marta Green.

NUHW filed the complaint with the California Fair Political Practices Commission. Kaiser hired Gallagher in 2012 while she was investigating the organization’s health plan for mental health services access. She later served as a practice leader in Kaiser’s regulatory response business unit, according to California Healthline. Gallagher has agreed to pay a $3,000 administrative fine to the commission for violating a ban on state administrators being compensated to help firms in the same audit proceedings in which they previously had been involved. According to the commission, the fine is lower than the $5,000 maximum penalty because Gallagher cooperated with the investigation and does not have a history of violations.

Security Life introduced the GemStar 1000 group dental plan. The waiting period, brochure-rated option plan comes with a $1,000 annual maximum with the opportunity to buy-up to $1,500, offers no deductible for preventative services, and features the savings benefits of the Maximum Care network. The simple, straightforward pricing and benefit structure, makes providing quotes for clients easier. For more information, visit SecurityLife.com.

Dr. Julie Hodges’s book, “Managing and Leading People Through Organizational Change” addresses the individual, team, and organizational issues before, during and after change. The book includes  case studies and interviews with people from organizations in different sectors across the globe. For more information, email mmondi@koganpage.com.

Application activity for individually underwritten life insurance posted its largest historical year-end gain in 2015, up 2.7% year-to-date, according to the MIB Life Index. Continuing the expansion seen in the last two quarters of 2014, application activity gained momentum throughout 2015, suggesting continued growth heading into 2016. Excluding March, the MIB Life Index showed gains across every month in 2015, up 2.8% in December, year-over-year. The year 2015 rebounded to slightly below a highpoint in 2012.

For the first time in the history of the Index, the birth to 44 age group led all other age groups in year-over-year growth. Ages birth to 44 jumped 4.5% in December and finished the year up a record breaking 3.9% year-to-date; ages 45 to 59 were flat at 0.1% in December, up 0.7% year-to-date; and ages 60 were up 2% in December, up 2.3% year-to-date. The year 2015 showed a marked difference in life insurance buyer behavior. Gains for the age 60 and older group remain positive, but diminishing, with ages birth to 44 showing solid strength for five consecutive quarters. More than one-in-three American workers are Millennials (adults ages 18 to 34), according to Pew Research. “The transformative sales, underwriting, and distribution strategies insurers have been focusing on appear to be taking hold,” said Lee Oliphant, MIB Group’s Chief Executive Officer. For more information, visit www.mibgroup.com.