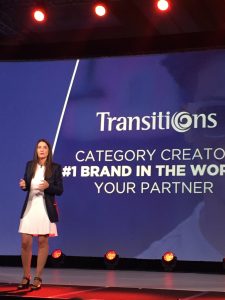 Cal Broker is here in Orlando, Florida. And, no, we’re not wearing mouse ears and sipping cocktails poolside! Absolutely not! We’re at the Transitions Optical Academy where we’re privy to interesting vision intel like:

“While enrollment in vision benefits remains high among all employees, new research reveals that younger generations—who continue to make up an increasing portion of the workforce—are not only significantly less likely to enroll, but are also less likely to understand the importance of regular, comprehensive eye exams.”

Looks like producers who sell vision products have big opportunities to educate! Speaking of opportunities, we heard that now that Davis Vision and Superior have merged, brokers should keep their eyes peeled for some bigger, better incentives very soon.  (Pssst…Don’t tell anyone, but there’s also a rumor that Transitions may bring back its “broker of the year” award…so, fingers crossed, maybe next year you can join us at this lovely  conference!)

HEALTHCARE
Trump Budget Calls for CSRs & Risk Corridor Payments
The Washington Examiner reports that President Trump’s budget calls for insurers to receive cost-sharing reduction payments as well as “risk corridor” payments, though some conservatives have attacked these as bailouts for insurance companies. Of course, Trump stopped making CSRs from the executive branch in the fall, but his budget calls for the payments to be appropriated by Congress. Risk corridors were installed from 2014 to 2016 to help insurers on ACA exchanges adjust to a new marketplace. Insurers that earn a certain amount pay into the program and in turn cover heavy losses from other insurers. The program didn’t work as intended, however, not enough insurers paid into the program to offset the losses. Trump’s budget calls for $812 million in both types of payments.

California Regulators Say They’ll Investigate Aetna Practices
The Aetna-CVS deal has dawn much attention lately to the insurer, but now California’s health insurance regulators are shining a light on Aetna for very different reasons.  The state’s insurance regulators have said they will investigate how Aetna makes coverage decisions, as the lawsuit of a California man who is suing the nation’s third-largest insurer for improper denial of care heads for opening arguments. From Kaiser Health News:

“The Department of Managed Health Care, which regulates the vast majority of health plans in California, said Monday it will investigate Hartford, Ct.-based Aetna after CNN first reported Sunday that one of the company’s medical directors had testified in a deposition related to the lawsuit that he did not examine patients’ records before deciding whether to deny or approve care. Rather, he relied on information provided by nurses who reviewed the records — and that was how he was trained by the company, he said.”

“I respect these three power players, who are enormous employers, are teaming up publicly to address the major issue of skyrocketing healthcare costs.  This is a huge initiative that will force positive change. Frankly, however, even with their 1.5 million lives domestically they are small and will not drive initial change without the involvement of a major carrier or two, which these three will quickly discover as they roll this out.

Carriers have two major legacy components of their value proposition:

What carriers are learning is that these two aforementioned items are not enough – they must push beyond. The big takeaway from this announcement is not that these three major companies have decided to join forces to make change, but that they are doing so publicly. The core message here is all around technology and leveraging efficiencies in a new way to drive down costs. This announcement is a clear sign that positive transformation in healthcare is underway.”

Aflac Announces Stock Split
Aflac Incorporated announced that its board of directors has declared a two-for-one stock split of the company’s common stock in the form of a 100 percent stock dividend payable on March 16, 2018, to shareholders of record as of the close of business on March 2, 2018. This is what Investopedia has to say about stock splits:

“A stock split is used primarily by companies that have seen their share prices increase substantially and although the number of outstanding shares increases and price per share decreases, the market capitalization (and the value of the company) does not change. As a result, stock splits help make shares more affordable to small investors and provides greater marketability and liquidity in the market.”

Last month — before the stock split– the Motley Fool offered investor advice about Aflac, which has recently weathered  allegations of fraud and employee misconduct.

Using predictive modeling, data scientists at LIMRA’s new Center of Excellence for Data Analytics have identified factors that influence individual life insurance buying behavior and have built profiles of types of customers who are likely to buy. This analysis, along with experts of social economics and customer experience, will be featured at the conference, which is jointly hosted by LIMRA, LOMA, the Society of Actuaries (SOA) and the American Council of Life Insurers (ACLI). Register here.