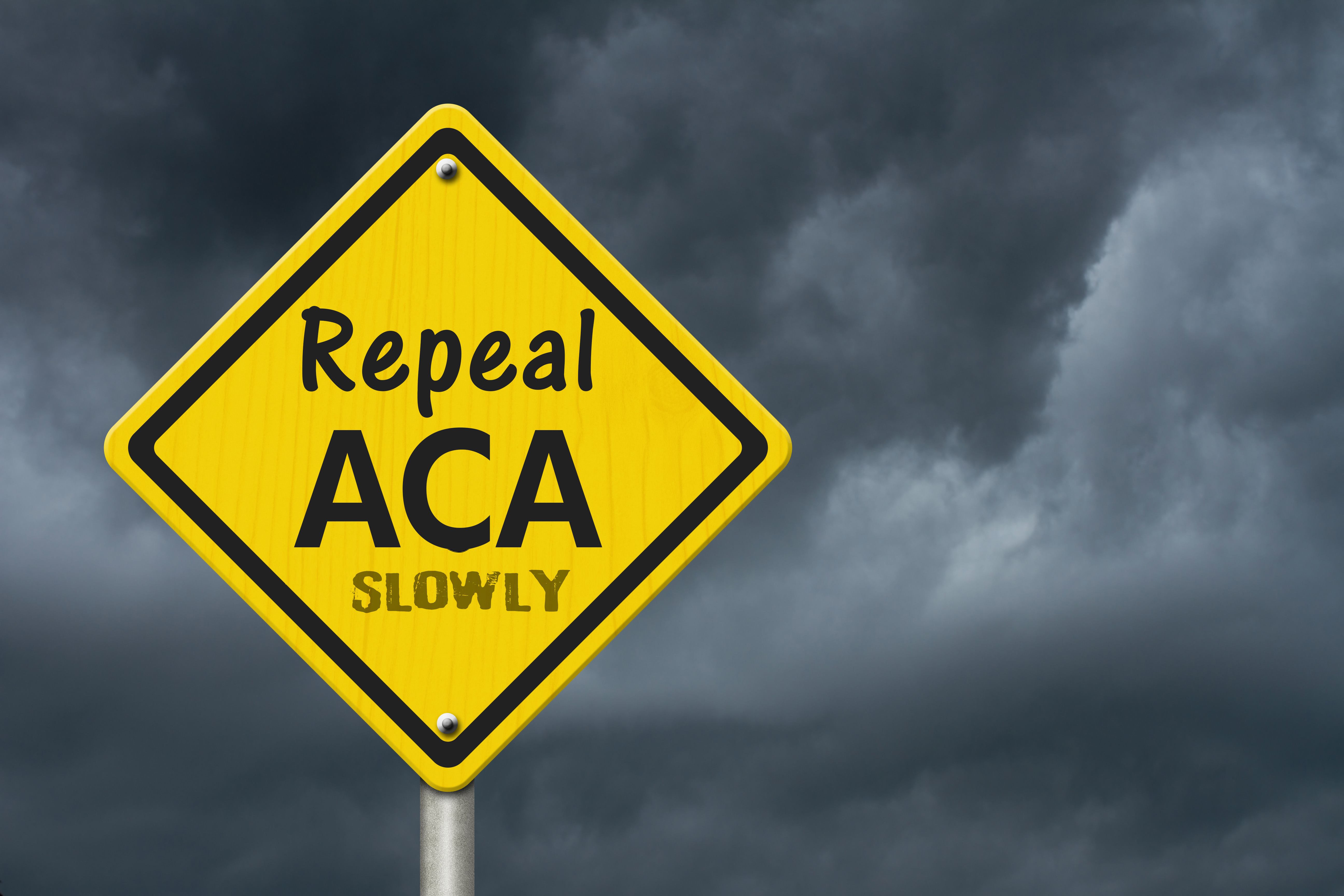 The board of the National Association of Health Underwriters wants health insurance reform to proceed at an orderly pace and said that repeal of tax credits should be delayed until 2019 to allow for stability in the marketplace.

“Our industry is in for quite a ride as this new term gets underway,” the board of the state association noted in an email on Jan. 24. “All indications, including one of the first executive orders to carry Potus 45’s signature, are that the ACA will most definitely be undergoing swift and significant changes.”

The National Association of Health Underwriters is working with House and Senate leadership, and committees of jurisdiction, on how to create a sustainable insurance marketplace that controls cost but also allows citizens to be protected and retain coverage.

NAHU’s position is that any efforts for the repeal of tax credits, cost-sharing tax credits, tax credit to territories and the small business tax credit be delayed to January 2019 in order to allow time for a replacement mechanism to be put in place to prevent a destabilization of the market.

Members of the California Association of Underwriters believe it is critical, as part of any health care reform at the federal level, to ensure that licensed agents are able to continue to help clients and consumers find and keep quality affordable health care now and in the future. California has its own statutory framework – distinct and apart from the federal law. California law will stand, even if the federal laws are changed, replaced or repealed, unless the federal statute also dictates a dismantling of California law.

The political signal of the order, which Trump signed just hours after being sworn into office, was clear: Even before the Republican-led Congress acts to repeal the 2010 law, the new administration will move swiftly to unwind as many elements as it can on its own — elements that have changed how 20 million Americans get health coverage and what benefits insurers must offer some of their customers.

But the practical implications of Trump’s action on Friday are harder to decipher. Its language instructs all federal agencies to “waive, defer, grant exemptions from or delay” any part of the law that imposes a financial or regulatory burden on those affected by it. That would cover consumers, doctors, hospitals and other providers, as well as insurers and drug companies.

The prospect of what could flow from pulling back or eliminating administrative rules — including no longer enforcing the individual mandate, which requires Americans to get coverage or pay an annual penalty, and ending health plans’ “essential benefits” — could affect how many people sign up on the Affordable Care Act marketplaces before open enrollment ends Jan. 31 for 2017 coverage, as well as how many companies decide to participate next year.

Robert Laszewski, president of the consulting firm Health Policy and Strategy Associates, called the executive order a “bomb” lobbed into the law’s “already shaky” insurance market. Given the time it will take Republicans to fashion a replacement, he expects that federal and state insurance exchanges will continue to operate at least through 2018.

Judge Rejects Aetna-Humana Merger
A federal judge has prohibited the merger of two health insurance giants, Aetna and Humana, upholding the Justice Department’s decision that the $37 billion deal would hurt competition and raise prices for consumers.

“The Court is unpersuaded that the efficiencies generated by the merger will be sufficient to mitigate the anticompetitive effects for consumers in the challenged markets,” U.S. District Judge John D. Bates wrote in his 158-page opinion reported in the Washington Post.

In July, the Justice Department sued to block the merger, arguing that it would reduce competition in the Medicare Advantage market and in some of the exchanges set up under the Affordable Care Act. Medicare Advantage plans are Medicare health plans offered by private insurers.

“We are reviewing the opinion now and giving serious consideration to an appeal, after putting forward a compelling case,” Aetna spokesman T.J. Crawford said. The companies’ merger agreement, which has already been extended twice, will expire Feb. 15.

Humana did not immediately respond to a request for comment.

Bates wrote in his opinion that the proposed merger would have decreased competition substantially in the Medicare Advantage market in 364 counties. Aetna and Humana had argued that Medicare Advantage plans also competed against traditional Medicare options, but the judge sided with the Justice Department that the private Medicare plans were a separate market. The companies also proposed that divesting some of that business to a smaller insurer, Molina Healthcare, could have addressed those concerns, but the judge did not agree.

National General Chief Executive Barry Karfunkel stated: “We are excited to welcome the wonderful staff of the acquired Word & Brown Cos. entities and look forward to the continued expansion of our Accident and Health division with the addition of Quotit and HealthCompare.  Quotit is one of the largest comparative raters that exist in the market today and we look forward to leveraging their platform to enhance our offering within the A&H marketplace.  HealthCompare enhances the scale of our A&H segment by broadening the scope of customers that we are able to connect with health policies through a direct to consumer platform, while allowing more seamless sales of Medicare and other health insurance product lines by leveraging the same platform as Velapoint. We are able to expand the Medicare platform by bringing those products to our independent agents currently selling our health insurance products.”

Orthopedic Company Swings Into California Market
Stryker Orthopaedics of Mahwah, N.J., kicks off its fourth consecutive year as the Official Joint Replacement Products of the PGA Tour and PGA Tour Champions” this week with an appearance at the Farmers Insurance Open in La Jolla, Calif., on Jan. 26 and marking the first time the company has activated in the Southern California market. Throughout the season, Stryker will continue to advance its mission to educate golf fans about the importance of joint health with a newly designed Mobility Zone.

As the premiere feature of the Mobility Zone, the new Stryker Challenge will invite visitors to take a shot at surgery with a hands-on experience introducing Art H. Ritis, a life-size model that aims to provide tournament goers a basic understanding of joint replacement surgery and Stryker’s products. The revamped Mobility Zone allows visitors to speak with local surgeons to further understand potential treatment options for joint pain. In addition, fans will have the opportunity to enter for the chance to win a trip for two to the Tour Championship.

“We are excited to kick off another season and to present our new Mobility Zone and the 2017 Stryker Challenge,” said Bill Huffnagle, president of Stryker’s Joint Replacement Division. “These efforts we make here on the golf course with fans further proves that Stryker is dedicated to educating consumers across the nation about making important strides to better healthcare decisions.”

Doctors Reject Accusation of ‘Surprise’ Bills
Health insurance companies are ignoring a real solution to “surprise” medical bills and misleading their customers and the public when they blame physicians, according to Dr. Rebecca Parker, president of the American College of Emergency Physicians.  Dr. Parker gave the following statement in response to media coverage generated by a recent letter published in the Journal of the American Medical Association:

“Several recent news reports present inaccurate, one-sided perspectives of the ‘surprise billing’ issue, exaggerating the severity of the problem and placing the blame on physicians, when in fact it is the insurance companies who are gaming the system, and taking blatant advantage of their customers, who are our patients. The letter in JAMA focused on all physicians, but insurance companies need to shoulder the blame for the out-of-network situation in emergency medicine, because they are narrowing their networks of medical providers, making it more likely that patients will be in out-of-network situations, and they continue to pay less.  The study also defines any charges above Medicare as excessive, which is not true.  Historically, they have sought to deny payment for emergency patients as much as possible.”

Annuity Indexes Unveiled
Great American Life in Cincinnati is expanding its annuity offerings with two new indexed strategies that earn interest based on the performance of the iShares U.S. Real Estate ETF and the S&P U.S. Retiree Spending Index.

According to John Burhoe of Great American, the iShares U.S. Real Estate indexed strategy provides an opportunity for diversification.

“The real estate market tends to perform well when interest rates are low, which provides contract owners the opportunity to diversify their funds,” he said. “Since returns on real estate typically vary from those on other asset classes, allocating to the iShares U.S. Real Estate indexed strategy may allow contract owners to earn interest even when other Indexes are performing poorly.”

According to Joe Maringer, another Great American executive, the S&P U.S. Retiree Spending point-to-point indexed strategy may allow contract owners to capitalize on the economic impact of shifting demographics.

“Every day, 10,000 baby boomers leave the workforce and bring their spending power and evolving priorities to the broader economy,” he said. “The S&P U.S. Retiree Spending Index gives investors an opportunity to grow their money by exposing it to economic sectors where they – and other retirees – may be spending heavily. Economic sectors are determined by the Bureau of Labor Statistics, and include transportation, healthcare, entertainment and leisure. The S&P U.S. Retiree Spending indexed strategy may allow contract owners to grow their money based, in part, on where they are spending it, and should the inevitable drawback in the market occur, their money is protected through the structure of a fixed-indexed annuity.”

Don’t Get Stuck on the Old Ways
The Internet gives us a new way to market and operate, but there are still some businesses that are stuck on their old ways, ultimately missing opportunities. Some business owners are stubborn and some are just straight-up scared of change.

There isn’t a single business that can’t benefit from marketing online. Take Little Church of the West, a historic wedding chapel that just celebrated 75 years of Vegas weddings. They thrived before the Internet and they continue to do well, proving that every business can experience a successful transition to online marketing.

“The life and health insurance industry is facing monumental disruption driven by shifts in demographics, consumer preferences, technology and the regulatory environment,” said Mr. Perry. “AmeriLife, with its diverse insurance product portfolio, powerful distribution and advanced technology platform, is well positioned to respond to these changes. I intend to build on the tremendous legacy that Tim and the AmeriLife team created, and further position the company as the first choice and most-trusted insurance provider, serving Americans across the country.”

With more than 30 years of insurance industry experience, Mr. Perry most recently served as Chief Business Officer of the CNO Financial Group in Chicago. While at CNO Financial, he was responsible for multichannel operations across each of its three insurance subsidiaries: Washington National, Colonial Penn and Bankers Life. Previously, Mr. Perry was President of Bankers Life, where he also held a variety of leadership positions in sales and distribution. Mr. Perry relocated to Clearwater to lead AmeriLife.

Arsenault has helped shape the long term care insurance industry since its earliest days both at insurance carriers and in distribution, including three years as Brokerage Sales Director with ACSIA Insurance Services, which coincidentally LTC Global later acquired. In his new capacity, Arsenault will guide and expand LTC Global’s relationships in the LTC business and in the life and health insurance industry in general.

“Gene is an icon in the LTC industry, and we’re very fortunate to have him at LTC Global,” said Daniel G. Schmedlen Jr., chief executive of LTC Global.