Senators Orrin Hatch (Utah) and Kevin Brady (Texas) are the latest to try their hands at health reform. The senators just proposed a plan that will resume critical CSRs while appeasing the White House and the House Republicans with provisions that diminish the ACA, including eliminating the individual mandate to hold insurance or pay a tax. Hatch says full legislative language of their proposed plan will be available soon. Lawmakers are said to still be digesting the proposal. Read more at The Washington Times and Employee Benefit News.

Speaking of CSRs (because who isn’t?)…

The American Academy of Actuaries’ Health Practice Council is urging Congress to help stabilize the individual health insurance market by permanently funding cost-sharing reduction (CSR) reimbursements to insurers under the Affordable Care Act, considering the Trump administration’s decision to immediately end the payments. “Higher premiums are necessary when CSR reimbursements to insurers are not made,” said Academy Senior Health Fellow Cori Uccello. “In states where rates for 2018 were filed assuming federal CSR payments would be made, premiums may be insufficient to cover the cost of care, which could lead insurers to reconsider their decisions to participate in the market. Permanently funding the CSR reimbursements through congressional action is needed to avoid further premium increases and insurer market withdrawals that could lead to a loss of coverage.” Under the ACA, low-income enrollees are eligible for CSRs to decrease their out-of-pocket spending requirements, reducing the financial barriers to receiving health care. The law stipulates that insurers provide the CSRs to eligible enrollees. The law also stipulates that the federal government reimburse insurers for the CSRs, and until now the federal government has done so. However, these payments were legally challenged and a U.S. District Court ruled that they are subject to congressional appropriation. Absent these reimbursements, insurers would need to raise premiums accordingly to cover the costs of the CSRs. “Enrollees who receive premium subsidies would be insulated from the full increase in premiums caused by the end of CSR reimbursements, but enrollees who don’t could face the full brunt of the increase, potentially reducing enrollment, increasing the uninsured population, and deteriorating the risk pool,” said Uccello. “Permanent congressional appropriation of CSR reimbursements could prevent these destabilizing effects.” In addition, in the absence of CSR reimbursements, federal spending will likely rise. The Congressional Budget Office estimated that the increase in federal premium subsidies would exceed federal savings due to eliminating CSR reimbursements to insurers. For more info, see the Health Practice Council FAQ.

And Speaking of Wrecking the ACA (because who isn’t?)…
Bloomberg reports that though the Affordable Care Act remains the law of the land, that doesn’t mean the president can’t persuade people otherwise.  “Obamacare is finished,” Trump said at an Oct. 16 cabinet meeting, three weeks after the Republican-controlled Senate failed to repeal the ACA. “It’s dead. It’s gone. It’s no longer—you shouldn’t even mention it. It’s gone. There is no such thing as Obamacare anymore.” Read the Bloomberg article to see how cuts in funds to market/promote and other administration shenanigans will all but hobble the ACA during open enrollment.

We Asked About Insurance Industry Haters, You Told Us
Last month, we wondered if CBers watched the debate between Sens. Lindsey Graham, Bill Cassidy, Bernie Sanders and Amy Klobuchar that aired on CNN. We’d noticed that some of the debaters had little good to say about the insurance industry. We asked: Have you experienced an uptick in negativity from acquaintances because of your role in the insurance industry? Has a changed public sentiment about insurance and the insurance industry impacted you?

Here are a couple of the responses…
“I discuss a few topics with people to dig into the true problems with the health insurance industry. I have a basic equation to simplistically model health insurance premiums:  Health Premiums = Healthcare Costs (doctors, labs, hospital, imaging, rx, etc.)/ (Medical Loss Ratio).  This is a simple way to show what variables will have the greatest impact on reducing premiums.  Even if you set MLR to 100 percent the net effect is that the healthcare costs drive the premiums and those are the variables that need to be addressed to reduce premiums. The other issue I discuss is the fact that we do not have a healthcare market with rational pricing.  Frequently people will call me explaining that they need an MRI and the imaging center offers a cash price that is about $500. The imaging center states that if they run it through insurance it will cost about $2,500.  If they are willing to accept $500, then the insurance carrier should also pay $500.  Thus, insurance carriers in this example are paying 500 percent more than a cash pay patient.  Any reform effort being considered should focus on these types of structural issues.  It is not always the insurance carrier that is the problem.” – Jeff R. from Mission Viejo.

“I had to stop the lead article at ….on CNN the other night…….why on earth would I watch CNN? Of course they are insurance haters and biased in their debate tactics.” — Paula from the Riverside area

(Editor’s note: We didn’t notice anything untoward with the CNN commentators. The debating senators — memorably Graham, Cassidy and Sanders – took most of the jabs at the industry. Review the debate to see for yourself.)

Thanks for the input. We adore our readers and love to hear from you! Have something else on your mind? Email editor@calbrokermag.com.

However, the catch-up contribution limit for employees aged 50 and over who participate in those plans remains unchanged at $6,000. Find out more here. 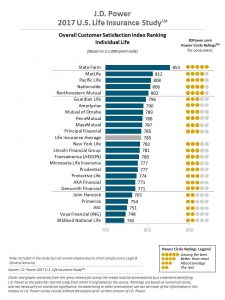 J.D. Power released its 2017 U.S. Life Insurance Study. The study found that better economic conditions, favorable pricing, and superior customer service have driven satisfaction with life insurance plans to a record high  — 785 on a 1,000-point scale, up 16 points from 2016. Discounts — especially multiple policy discounts — seemed to help, but the much-hyped use of wearables didn’t gain a lot of traction. State Farm ranked highest in life insurance customer satisfaction for a fourth consecutive year, with a score of 853. State Farm is also the industry leader in providing policy discounts (67 percent vs. 40 percent industry average). MetLife ranked second with a score of 812 and Pacific Life ranked third with a score of 808.

The Standard Launches New Accidental Death and Dismemberment Occupational Assistance Service The Standard Insurance Company announced it has added accidental death & dismemberment (AD&D) occupational assistance service as a complimentary feature to its Group AD&D and Life insurance products. The service is the first of its kind in the industry and can provide support to employees who have experienced an AD&D loss to help them return to work and productive lives. AD&D occupational ssistance provides employees, who have experienced an eligible specified accidental dismemberment, with access to The Standard’s Workplace Possibilities consultants to provide guidance on how to best address any new challenges and get back to work. Consultants can collaborate directly with the employer, employee and his or her medical team to understand the medical condition, learn job roles and daily responsibilities, and recommend appropriate solutions or accommodations as part of a rehabilitation plan. Consultants also can help purchase medically supported ergonomic equipment. For more info, go to The Standard’s AD&D Occupational Assistance page. 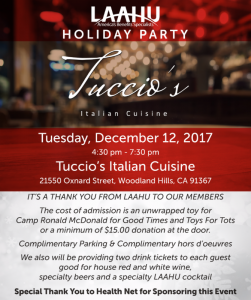 LAAHU, with support from Health Net, will host a holiday cocktail party at Tuccio’s in Woodland Hills Dec 12 from 4:30pm-7:30pm. Cost of admission is an unwrapped toy or $15. Register here.

Dinallo Joins Guardian as Executive VP, Rich Retires
The Guardian Life Insurance Company announced that Eric Dinallo will join the company as executive vice president and general counsel in December. Dinallo succeeds Tracy Rich, who has served as Guardian’s Executive Vice President and General Counsel since 2009, and will be retiring.