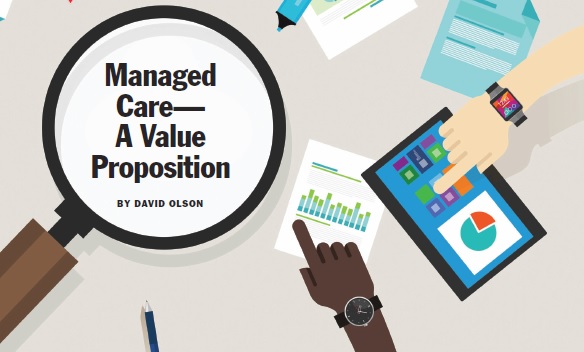 IT’S BEEN AN EXTRAORDINARY YEAR— and it’s not done yet—but one thing remains the same. Healthcare is again a hot topic, as it seems to be every time we go to the ballot box. On a national level, the future of the Affordable Care Act seems to hang in the balance. Local issues are also engaged.

This follows the Democratic primary season where Senators Bernie Sanders and Elizabeth Warren were joint advocates of “Medicare for All.” The eventual nominee, Joe Biden, president-elect, is not a supporter of the concept but has said he’ll put forward the “public option,” offering Medicare to those under 65 who cannot otherwise obtain coverage.

As part of their advocacy of Medicare for All during the primary debates, the two senators attacked private health insurance companies. They questioned executive compensation, profit levels and other factors that they claimed added little or no value to the healthcare equation. Such attacks against health insurance in general and managed care, in particular, weren’t breaking news. Politicians have inveighed against the health insurance industry for years. Often the criticism centers on, “what value do such companies bring to the table?”

Commentators have pointed out that despite this, at times, withering criticism, neither candidate who supported Medicare for All won the Democratic nomination. The majority of Democratic voters said no to Medicare for All. The fact is that approximately 170 million Americans have private health insurance through their employers. Generally speaking, these Americans are satisfied with their health plans.

Now, does this mean that managed care can rest easy? I don’t think so. While they didn’t win, the senators did garner significant support. The idea of Medicare for All or another form of a single-payer health insurance system keeps popping up in many and varied ways, from debates to ballot initiatives and in other forms.

One might recall that we had a ballot initiative on single-payer here in California in 1998. It was soundly defeated. There’s talk it could come back and other states have considered such initiatives. With persistent healthcare cost inflation back on the front burner of concerns, it’s not time to sit back.

With all this going on, managed care needs to engage in a conversation with the American people about the value it brings to the cost of and access to healthcare services. It’s not something to be tiptoed around or whispered about. Managed care brings real, tangible value to healthcare, individual health plans and the industry overall. This story needs to be told more dynamically so that managed care secures its place as part of the solution to our healthcare challenges—not as part of the problem.

So, what are our challenges? Two stand out—affordability and access. Managed care plays a pivotal role in each and in California the unique nature of our managed care marketplace makes it a model for the nation.

Let’s look at affordability through the prism of the California marketplace. There are today approximately 230 medical groups and independent physician—or practice—associations (IPAs) up and down the state. Most of the state’s approximately 46,000 practicing physicians are in one or more such groups.

The groups serve as the organizing agents for care delivery and as the primary negotiating intermediaries between physicians—and in some cases hospitals—and health plans. It’s always a good thing to remember that no other state has this kind of provider infrastructure. It’s one of the secrets to our affordability success. 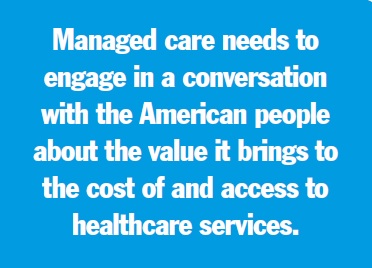 I use the word “secret” intentionally. I doubt if a regular health plan member knows how pervasive these organizations are. They might get a glimmer of how it works when an individual physician office complains about “the insurance company.”

Often, the complaint is about the IPA. The member gets confused and caught in the middle. A potential complicating factor is the prevailing use of capitation to compensate physician groups and IPAs. From time to time, you’ll hear negative noise about capitated arrangements. In use for many years here in California, such arrangements are becoming all the rage in other parts of the country, as everyone struggles with the ever-present affordability challenge.

One of the unsung benefits of capitated arrangements is that they are the only way to create financial incentives that see providers succeed when they keep members well and healthy. One big problem with fee-for-service is that no such incentives exist. Well performing capitated groups and IPAs do better when their members remain healthy. Further, this spurs a more comprehensive approach to preventive care. It should be noted that HEDIS and other quality measurement criteria have also helped.

When the costs of physician organizations are measured against costs of unorganized physician networks the comparisons are striking. When I was at Health Net, we studied the performance of our groups and IPAs in Southern California against the performance of our networks in the New York metropolitan area. Costs in New York were more than 40% higher with no discernable difference in quality.

At health care conferences, executives with plans in other parts of the country will tout their use of “value-based contracting.” What they are really talking about is a form of capitation, where hospitals absorb financial risk in return for meeting certain quality metrics. It’s what we’ve been doing here in California for many years.

But affordability isn’t just about capitated arrangements. For many years, managed care plans have responded to employer requests for greater affordability with innovative solutions that have helped stem healthcare cost inflation. One example is the success in generating greater use of generic drugs through plan design and focused negotiations with pharmaceutical manufacturers when there are competing “me too” drugs in a single therapeutic category.

In addition, many plans have been more discerning about hospital contracting. It sometimes happens that one hospital has significantly higher charges for primary and secondary services compared with a cross section of similar facilities in a given region. If they won’t budge on reimbursement, plans use favorable co-pays and
deductibles to incentivize members to use lower cost facilities with comparable quality. The higher cost facility may remain in the network for tertiary and quaternary care. On rare occasions, certain facilities may be deemed out of network.

This last and most drastic step sends an important message throughout the system—that ever-increasing charges at levels well above healthcare cost inflation are not sustainable. Put another way, plans bear the responsibility to make sure every participant in the delivery system understands the need for constant watchfulness about affordability.

But, doesn’t this seem counter to the desire for access? On the surface, it might seem that way. In order to hold the line on affordability, aren’t plans shrinking networks, thereby limiting access? The argument is that if something is not affordable, access is a moot point. You could have access to a 100 ft. yacht but if it costs millions of dollars, the access is meaningless.

What access does mean is that a comprehensive range of services, including the newest technologies, is a given for a health plan. There are regulations that cover this but it’s also a competitive imperative. If a plan’s network lacks access to certain specialized services it will simply not succeed in the marketplace.

For this reason, any effort to pare the network of services is done only if similar services are available close by. In urban California where provider competition is robust this is not an issue.

Some of what has been discussed above is well known inside the business. Some isn’t. What managed care plans should do, in my opinion, is put more resources behind communicating clearly and directly to all stakeholders the success they’ve had in ensuring both affordability and access. Some of this success involved hard choices. Some met with significant provider resistance. They all mattered.

Employers—they pay the bill after all—have welcomed these efforts and continue to spur plans to even greater innovation so that premiums will remain affordable. In so doing, employers can continue to provide their valued employees with the single most important benefit—health care. 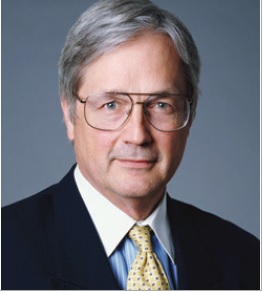 DAVID OLSON is a senior counselor with the Los Angeles office of The Abernathy MacGregor Group, a strategic communications consulting firm headquartered in New York City. Olson is the former SVP, corporate communications and an executive officer of Health Net, Inc., one of the nation’s largest publicly traded managed health care companies. He has broad experience ranging from investor relations to crisis and financial communications with an especially deep expertise in the health care sector. Email: dwo@abmac.com.