The U.S. has a well-established insurance market which blends traditional agent-sold approaches, direct mail, phone and online marketing strategies. But what’s the picture for 2023? And why are American consumers increasingly utilizing online services and leveraging their data more than ever before? We spoke to global InsurTech company ReMark about the Global Consumer Study (GCS) 2022-23, their new research into consumer attitudes. They walk us through three key consumer trends U.S. insurers need to be aware of in the coming year, and how attitudes towards insurance in America differ from those around the world. They also bring us up to speed on the growing importance of consumer mental health and why employers and insurers alike can no longer afford to turn a blind eye.

What is the GCS?

ReMark’s Global Consumer Study (GCS) is an annual global survey of consumer attitudes towards insurance, starting in 2014. It gives an insight into major consumer trends on topics like artificial intelligence (AI), data privacy, health and even telematics. The GCS 9 — this year’s edition — was based on responses to an online survey of 12,728 consumers drawn from 22 key insurance markets around the world. Fieldwork was conducted in April 2022 by ReMark’s market research partner Dynata. The sample and methodology for each market aim to be representative of consumers or potential consumers of insurance, based on national sets of demographics parameters (age, gender, and region).

Insurance Literacy: Find out how much Americans know about insurance.

So, how much do Americans know about insurance? 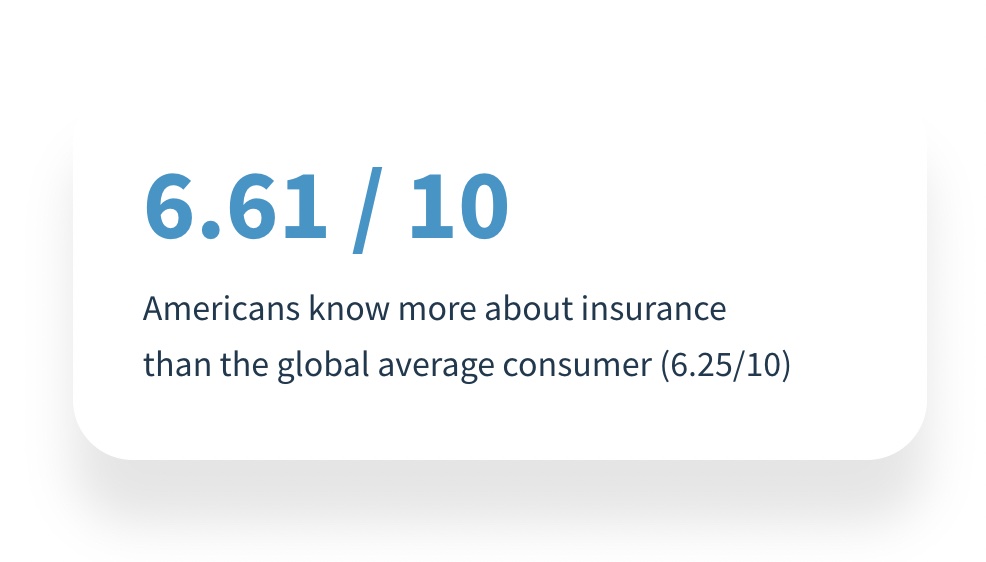 It should also be noted that multiple online points-of-entry are being used by American consumers. Our U.S. respondents most commonly used online services to get an insurance quote or recommendation (34.5%), followed by uploading personal details or documents (29.8%) and paying an insurance premium (28.8%).

The data here are broadly similar to global trends, indicating that American consumers are very much intertwined with a global movement towards digitisation. Interestingly, despite good knowledge of insurance, the majority of U.S. respondents told us they still desire more education about financial services (54.2%).

Take away: The key products where further education may be useful are in the area of pensions and insurance. This is where U.S. consumers felt their knowledge was weakest. This could be an exciting opportunity for American insurers to make a real impact for their consumers over the next few years. 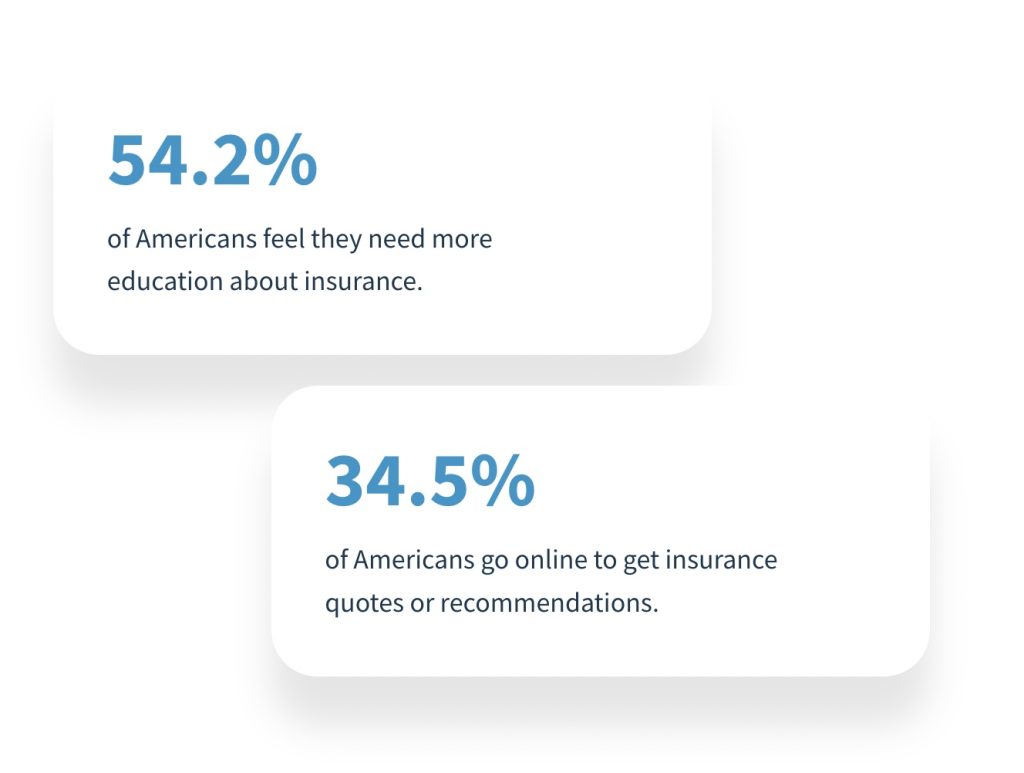 Data-sharing: What inspires American consumers to share data with their insurers?
Americans are happy to share data in exchange for benefits.

Our U.S. respondents showed a willingness to share data with insurers to enable them to assess risk. Interestingly, 80.5% of them felt either comfortable or very comfortable in sharing information about employment. This was followed by an openness around sharing previous claims data (79.2%) and health check-up data (76.7%), respectively — in each case they felt more comfortable doing this than the global average respondent. The possibility of a discount was the main driver here, with three quarters of U.S. respondents interested in the chance for reduced insurance premiums in exchange for sharing this data with insurers. When it comes to making a claim, the most popular method is via the phone for older generations but online for Millennial (1981-1996: 26-41 years old) and Gen Z respondents. Given that some U.S. insurers still only offer phone-based claim processes, this highlights the need for insurers to digitize to attract next-gen consumers.

Take away: Given that some U.S. insurers still only offer phone-based claim processes, this highlights the need for insurers to digitize to attract next-gen consumers. 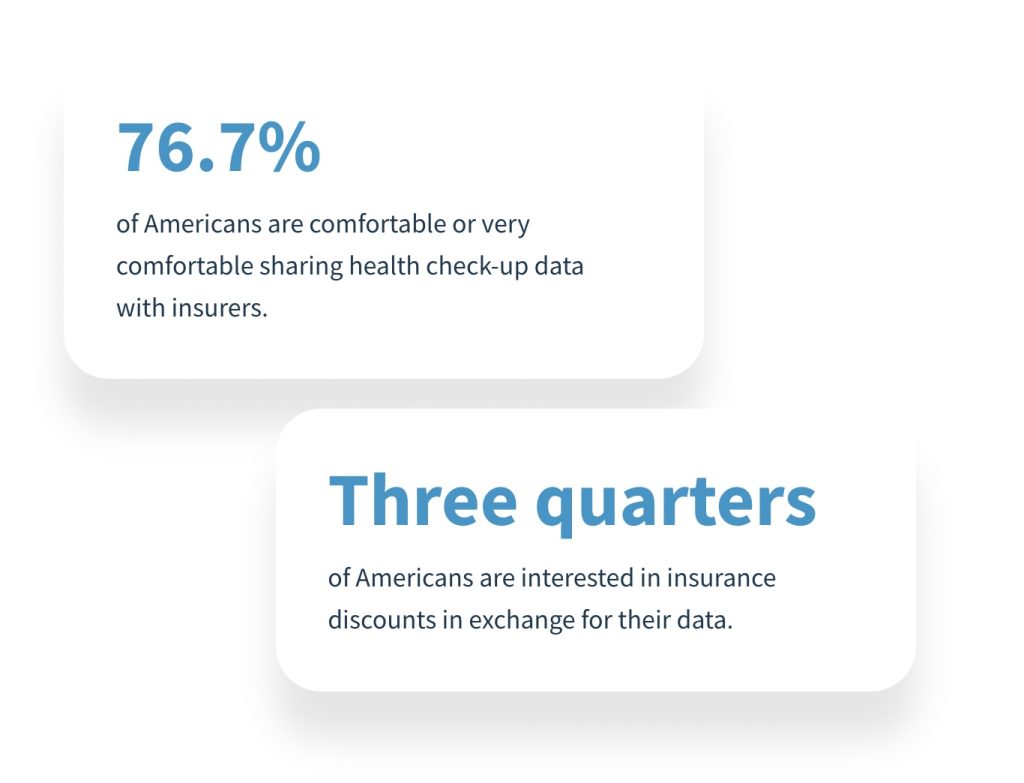 Health apps: How health app usage is split along gender lines in the U.S. American women in particular are keen users of health apps.

Data from this year’s GCS show the use of health and fitness apps is only increasing, with more than half of global respondents having a fitness app (51%). In the U.S., the popularity of these rises nearly another 10%.

Curiously, women seem to have a far greater appetite for general fitness apps than men, with 68.9% of American women owning one, compared to just 45.5% of American men.

Our research showed that Boomers and Gen X use general fitness apps more than Millennial and Gen Z respondents in the U.S. — though this may be explained by considering that many older individuals turned to health apps as a way to stay fit during Covid-19.

Take away: For insurers, the warning here is not to fall into the assumption that younger generations will be more likely to use health and wellness apps. Indeed, our data show that all age groups in America (possibly apart from the Silent Generation) show a desire to use them. 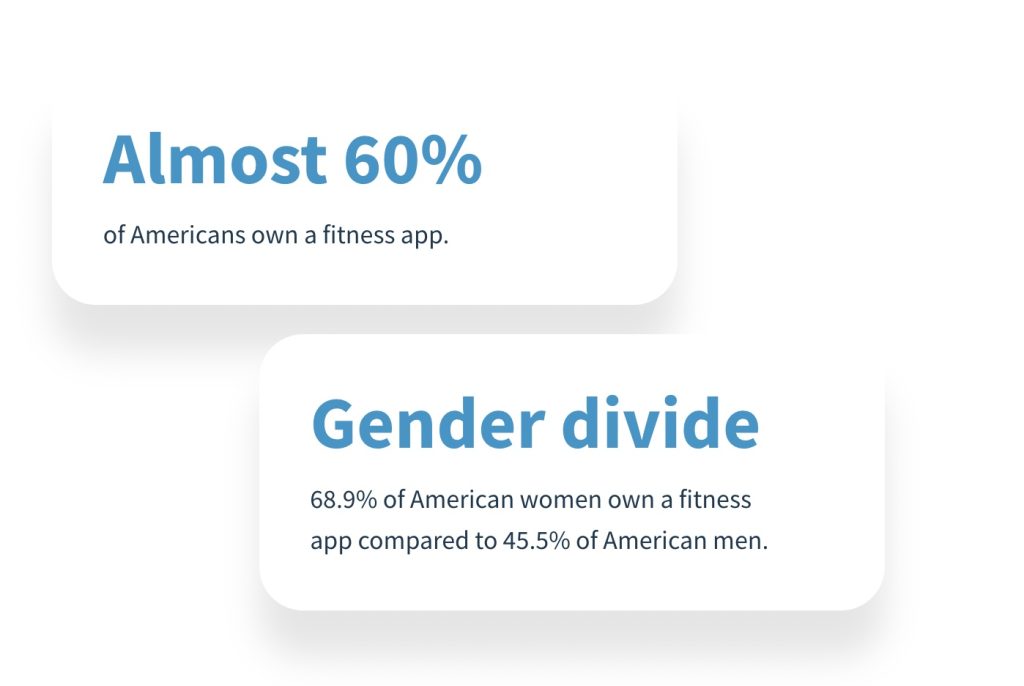 A deeper dive into Mental Health and Insurance

The full impact of the pandemic on mental health has yet to be fully understood but our research indicates that, after a 43% spike in 2021, stress levels are falling to their lowest level since we have been measuring it. This year, 34% of respondents globally say they often or always feel stressed. In the U.S. this figure is comparable, at 35.6%.

As we have seen in previous years, reported levels of stress are inversely correlated with age (Figure 30). Gen Z respondents were five times more likely to report being always or often stressed than those from the Silent Generation. 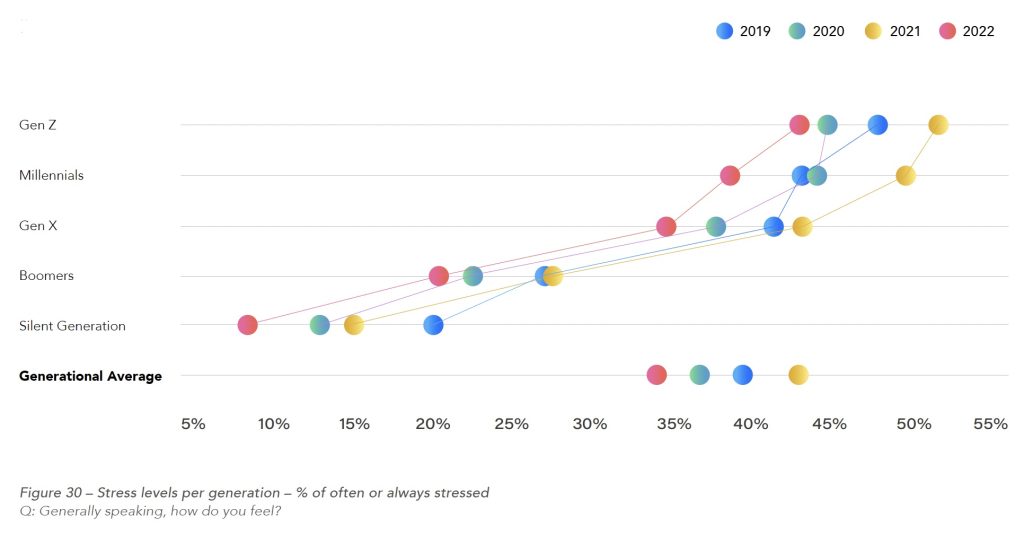 As shown in Figure 31, exercise has a beneficial effect upon feelings of stress. Those who rarely exercise are more likely to complain that they are often or always stressed.

Survey participants were asked about the potential issues that might lead to stress. For those who are not normally stressed this is, to some extent, a hypothetical exercise. Nevertheless, it shows some interesting generational differences. Overall, the two most likely causes were financial issues and health.

However, it is not surprising that at the generational extremes we see totally different answers. For Gen Z, finances are a likely cause of stress, whilst health is the least of their concerns. The opposite is true for those of the Silent Generation who are more acutely aware of their mortality and, in most cases, removed from exposure to pressures of work (Figure 32).

The impact of mental health

This year’s survey saw a very modest decrease in the percentage of respondents that have suffered a period of mental distress that prevented them from doing their usual activities. This dropped from 45.6% in 2021 to 43.2% this year. This is not an accurate indication of the incidence of mental distress during the year because respondents are asked if they had ever experienced such an episode. Nevertheless, it is a positive sign that the numbers are relatively stable.

A similarly modest decrease is evident among those who have ever been diagnosed by a medical professional as having a mental health condition such as depression, panic attacks or anxiety. This year, 27.6% of global respondents say they have had a diagnosis, down from 28.3% last year. America showed a similar drop, but maintains a higher rate of diagnosis among our consumers – 37.7% of U.S. respondents this year confirmed a mental health diagnosis, compared to 39.6% last year.

Looking at the findings by generation shows that the percentage of respondents who have had a professional diagnosis of mental illness decreases with age (Figure 33). These differences are more significant than they may first appear at first sight. The question asked whether respondents had ever had a diagnosis of mental illness, so it is concerning that, in their relatively short lifetime, 38.5% of Gen Z globally reported having such a diagnosis, compared with just 12.5% of the Silent Generation. 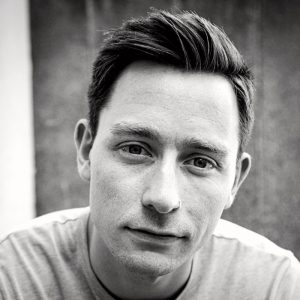 James Macdonald is the Content & Communications manager for ReMark. Based in London, James works on developing content around how insurance can work more effectively for people. His academic background is in Human Rights & Sociology, with specialisms in Genocide & Propaganda Studies. Prior to working at ReMark, James ran communications for London-based charity Beacon Collaborative, which works strategically to increase philanthropy in the UK.