President Donald Trump’s latest attempt to repeal and replace Obamacare is hanging in the balance.

Republican lawmakers are trying to rally votes to pass a new health bill this week after their previous attempt two months ago collapsed in disarray.

But even many Republicans say the bill undermines that popular element of President Barack Obama’s signature law.

Haven’t we been here before?

Republicans withdrew a healthcare bill in March to replace the Affordable Care Act (ACA), also known as Obamacare, after they were unable to secure enough support to pass it.

The withdrawal embarrassed the president, who has repeatedly vowed to repeal and replace his predecessor’s accomplishment.

It was also viewed as a major setback for Republicans, who were unable to rally behind the party’s long-held goal to repeal the law, despite control of both the House and Senate.

Moderate Republicans were unhappy that the bill cut health coverage too severely, while more conservative lawmakers felt the changes did not go far enough.

What’s different about the latest bill?

It keeps an Obamacare clause requiring insurers to provide coverage to those with pre-existing conditions, however, it also allows insurers to charge higher rates to those same patients.

States could obtain a waiver to allow insurers to charge higher rates based on the “health status” of a person if they let their coverage lapse.

Insurers could also offer policies that limit benefits for those with pre-existing conditions, which could affect the quality of policies.

The new bill’s amendment also allows states to apply for permission to opt out of the law’s essential health benefits, including maternity, emergency care and mental health.

At the centre of debate is whether the new amendment protects Americans with pre-existing conditions such as cancer or diabetes.

House of Representatives Speaker Paul Ryan insisted on Tuesday that “there are a few layers of protections for pre-existing conditions”.

Mr Trump told Bloomberg News on Monday: “I want it to be good for sick people. It will be every bit as good on pre-existing conditions as Obamacare.”

But critics say the new bill will allow insurance companies to charge sick people at significantly higher rates, ultimately pricing them out of the market.

The American Medical Association, the Association of Medical Colleges and other consumer advocacy groups have called on Congress to vote against the measure.

How disastrous for Trump is healthcare collapse?

The rise of Obamacare: Why is the ACA so popular?

How much support does it have?

With Democrats united in opposition, House Republicans are currently short of the 216 votes they need to pass the bill before the Senate could take it up.

They can afford only 22 defections, and the latest whip counts put Republican “no” votes at about 20, with a dozen more undecided.

Though the amended bill has brought some hard-line conservatives on board, moderate Republicans are hesitant to support a measure that is perceived to weaken protections for sick Americans.

Top Republican Fred Upton came out against the measure on Tuesday, saying he was “not at all comfortable” with removing protection for people with pre-existing conditions.

House Republican Billy Long, who campaigned against Obamacare in 2010, says he will not support the bill.

The Missouri lawmaker said it “strips away any guarantee that pre-existing conditions would be covered and affordable”.

No vote has been formally scheduled. Full story click here 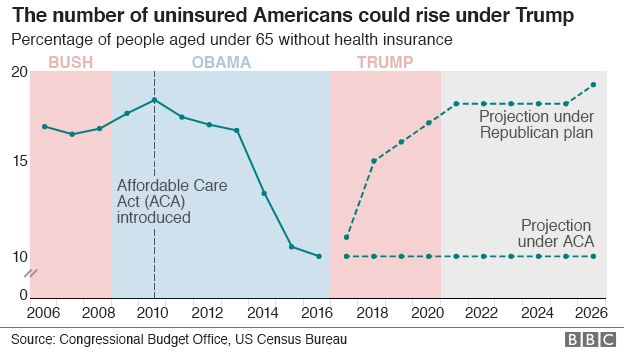