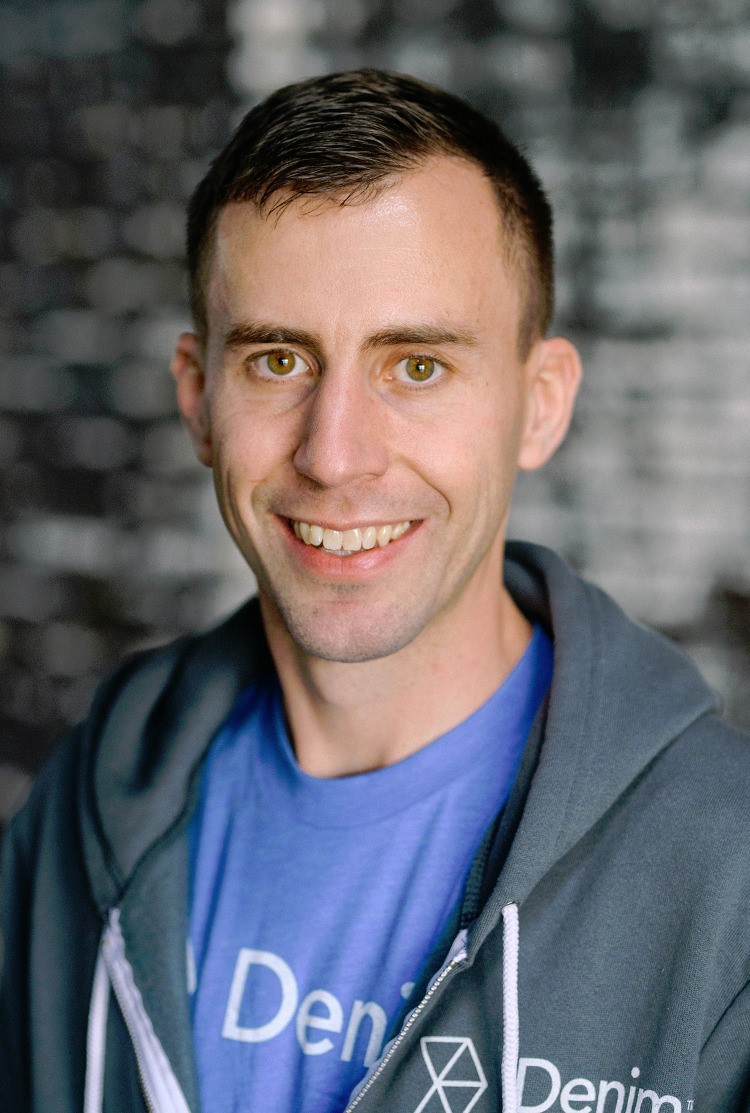 Earlier this year, Charlie Turri traded in his white collar and dress pants for a T-shirt and a pair of jeans — denim jeans.

Before Denim, Turri led an IT department of more than 350 employees for Des Moines-based Athene USA, a leading retirement services company that issues, reinsures and acquires retirement savings products. Prior to that, Turri held various leadership roles at American General Life & Accident Insurance, an AIG company in Nashville, Tennessee.

So why did he make the switch? In short, he wanted to make an impact.
“I wanted to be part of something that I really feel will fundamentally change a big business, in this case financial services and insurance,” Turri recently told Denim’s CEO and Founder Gregory Bailey on an episode of the company’s podcast, Denim Rivet. “As I started out in my career, I had a lot of opportunity and was fortunate to work on a lot of game-changing things. As I progressed, that started to wean away. As I started to think about what’s next and what would be really exciting for me, being a part of something that’s changing an industry was very appealing.”

Turri also said one of the drawbacks of working for a larger company is not always seeing the impact you’re making on a day-to-day basis. “What I do here matters right here, right now,” he said. “We were standing at the whiteboard moments ago. That will turn into a document that we will build from and have something ready to go very quickly, versus working weeks, months and years. Not that it’s right or wrong; it’s just how it is in a corporate world. We are allowed to do something a little bit different here.”

Another reason Turri made the change is perhaps best summed up by a quote from Margaret Mead that is prominently displayed underneath his bio on Denim’s team page: “A small group of thoughtful, committed people could change the world. Indeed, it’s the only thing that ever has.”

“Meeting the team here and understanding more about what you’re doing, how passionate everyone is about wanting Denim to be successful — I really wanted to be part of that passionate, small group,” Turri told Bailey.

Bailey can relate: He did the same thing when he founded Denim in 2015. Prior to launching the company, Bailey led national marketing and sales teams at Northwestern Mutual, Mutual of Omaha, CUNA Mutual Group, Pacific Life and Athene.

For Bailey, being able to move at a much faster pace was one thing that drew him to the startup world. “Velocity is the pace at which things happen,” Bailey said. “It doesn’t matter if you’re an insurance company, a financial services company — any type of big corporation is, by its very definition, going to have many layers of approval or processes or people involved in decision-making. And if that’s the case, things are naturally going to move at a slower velocity than a company like ours.”

To Turri, that also means the ability to take risks. “Frankly, [corporations] can’t take risks the way a company like Denim, number one, can and, number two, has to in order to upset some of the apple carts that we want to upset.”

Turri and Bailey aren’t alone. Here’s just a partial list of the accomplished insurance-industry executives who have left their corporate posts in recent years to join startups:

These executives’ decisions to join insurtech startups doesn’t necessarily mean they were unhappy in their corporate roles. However, research indicates many people, quitting or not, are dissatisfied.

According to CareerBuilder’s latest survey more than half of U.S. workers (55 percent) feel they have just a job, not a career, and 38 percent of these workers are likely to change jobs. While a variety of factors may contribute to this discontentment, Accenture conducted a study (across industries) and found the top four reasons employees quit their jobs include:

These factors could also explain why a Business Insider survey of 225 executives found 22 percent want to launch their own companies. Perhaps, like Turri and Bailey, they believe a startup will offer them the satisfaction and fulfillment they’re looking for.

As it turns out, the popular notion that startup founders are hoodie-wearing, 20-somethings launching highly successful startups from college dorm rooms or their parents’ basements simply isn’t reality.

Not only are many startups founded by more experienced professionals, that experience tends to result in greater success, according to research from MIT and Northwestern economists.

The researchers examined all businesses launched in the U.S. between 2007 and 2014, encompassing 2.7 million founders. They compared founder age to firm performance measures, including employment and sales growth, as well as the exit by acquisition or IPO, and found:

“Why would entrepreneurs get better with age? It’s not clear, but we have a few theories,” write two of the study’s authors, Benjamin Jones and J. Daniel Kim. “More seasoned entrepreneurs may draw on greater experience in management or deeper industry-specific knowledge. They may also have greater financial resources and more relevant social networks to leverage the founder’s business idea. For example, our study showed that prior work experience in the startup’s specific industry more than doubled the chance of an upper-tail growth success.”

That’s good news for Denim, whose two top executives have nearly 50 years of combined experience in the insurance and financial services industry.

“There is so much opportunity in the insurtech and fintech space to make vast improvements for insurance and financial services companies and the consumers who rely on them,” said Turri. “I’m thrilled to be able to use my experience as an insurance industry executive to take Denim’s technologies — and our customers’ successes — to the next level.”

My prediction is that we’ll see more insurance execs moving over to insurtech startups. And that’s a great thing.  Our industry needs to evolve, but we’ll evolve more intelligently if we include our seasoned veterans with their storehouses of knowledge.

Tim Laehn is director of marketing for Denim, where he leads the company’s communications and content marketing strategies. He has 10 years of experience in marketing and communications, including seven years in the financial services industry.