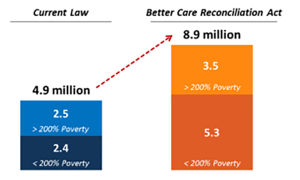 California has been approaching universal healthcare coverage in large part thanks to the expansion of the Medicare and Medi-Cal programs under the Affordable Care Act.

Only 3.5% of California’s population is uninsured and 1 out of every 2 children are covered by Medicaid, according to Marin General Hospital CEO Lee Domanico.

But that could all change under the Senate bill to replace the Affordable Care Act, Domanico said.

“If that were to reverse itself, it would really be devastating for those people and tough for us because that reimbursement could go to zero,” he said. “Bad debts would go up, which had gone down through the Obamacare plan with more people insured through the exchanges and expansion of the Medi-Cal program.”

The now-delayed bill, coined the Better Care Reconciliation Act, would slash the ACA’s financial assistance to families and individuals who couldn’t otherwise afford healthcare, cap Medicaid spending and roll back the Medicaid expansion afforded to states’ most vulnerable populations. Those changes could cause 22 million Americans to lose coverage and send insurance premiums surging.

In other words, providers would be forced to regress. Full Article here.